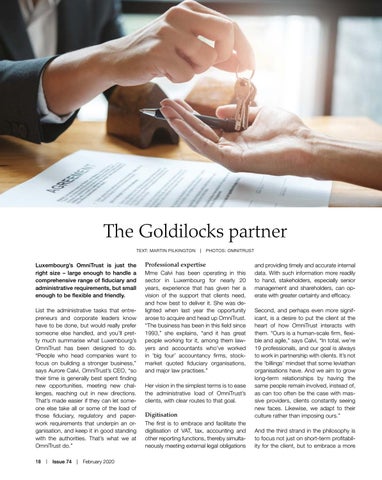 Luxembourg’s OmniTrust is just the right size – large enough to handle a comprehensive range of fiduciary and administrative requirements, but small enough to be flexible and friendly. List the administrative tasks that entrepreneurs and corporate leaders know have to be done, but would really prefer someone else handled, and you’ll pretty much summarise what Luxembourg’s OmniTrust has been designed to do. “People who head companies want to focus on building a stronger business,” says Aurore Calvi, OmniTrust’s CEO, “so their time is generally best spent finding new opportunities, meeting new challenges, reaching out in new directions. That’s made easier if they can let someone else take all or some of the load of those fiduciary, regulatory and paperwork requirements that underpin an organisation, and keep it in good standing with the authorities. That’s what we at OmniTrust do.” 18  |  Issue 74  |  February 2020

Professional expertise Mme Calvi has been operating in this sector in Luxembourg for nearly 20 years, experience that has given her a vision of the support that clients need, and how best to deliver it. She was delighted when last year the opportunity arose to acquire and head up OmniTrust. “The business has been in this field since 1993,” she explains, “and it has great people working for it, among them lawyers and accountants who’ve worked in ‘big four’ accountancy firms, stockmarket quoted fiduciary organisations, and major law practises.”

and providing timely and accurate internal data. With such information more readily to hand, stakeholders, especially senior management and shareholders, can operate with greater certainty and efficacy.

Second, and perhaps even more significant, is a desire to put the client at the heart of how OmniTrust interacts with them. “Ours is a human-scale firm, flexible and agile,” says Calvi, “In total, we’re 19 professionals, and our goal is always to work in partnership with clients. It’s not the ‘billings’ mindset that some leviathan organisations have. And we aim to grow long-term relationships by having the same people remain involved, instead of, as can too often be the case with massive providers, clients constantly seeing new faces. Likewise, we adapt to their culture rather than imposing ours.”

The first is to embrace and facilitate the digitisation of VAT, tax, accounting and other reporting functions, thereby simultaneously meeting external legal obligations

And the third strand in the philosophy is to focus not just on short-term profitability for the client, but to embrace a more

Her vision in the simplest terms is to ease the administrative load of OmniTrust’s clients, with clear routes to that goal.