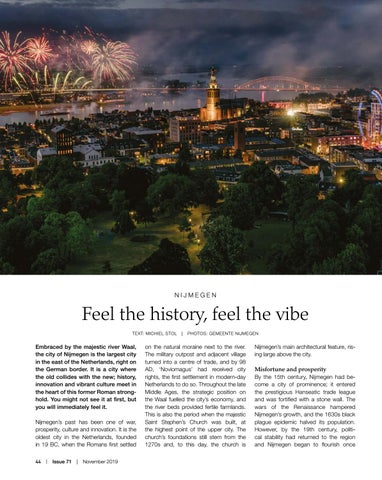 Embraced by the majestic river Waal, the city of Nijmegen is the largest city in the east of the Netherlands, right on the German border. It is a city where the old collides with the new; history, innovation and vibrant culture meet in the heart of this former Roman stronghold. You might not see it at first, but you will immediately feel it. Nijmegen’s past has been one of war, prosperity, culture and innovation. It is the oldest city in the Netherlands, founded in 19 BC, when the Romans first settled 44  |  Issue 71  |  November 2019

on the natural moraine next to the river. The military outpost and adjacent village turned into a centre of trade, and by 98 AD, ‘Noviomagus’ had received city rights, the first settlement in modern-day Netherlands to do so. Throughout the late Middle Ages, the strategic position on the Waal fuelled the city’s economy, and the river beds provided fertile farmlands. This is also the period when the majestic Saint Stephen’s Church was built, at the highest point of the upper city. The church’s foundations still stem from the 1270s and, to this day, the church is

Misfortune and prosperity By the 15th century, Nijmegen had become a city of prominence; it entered the prestigious Hanseatic trade league and was fortified with a stone wall. The wars of the Renaissance hampered Nijmegen’s growth, and the 1630s black plague epidemic halved its population. However, by the 19th century, political stability had returned to the region and Nijmegen began to flourish once