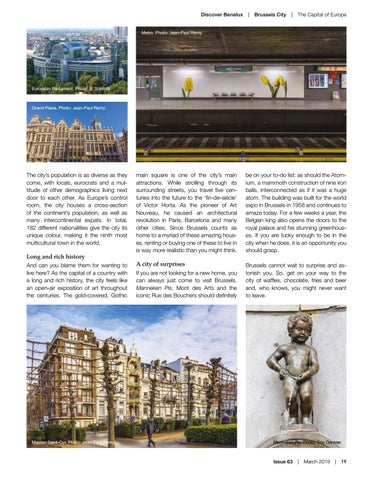 The city’s population is as diverse as they come, with locals, eurocrats and a multitude of other demographics living next door to each other. As Europe’s control room, the city houses a cross-section of the continent’s population, as well as many intercontinental expats. In total, 182 different nationalities give the city its unique colour, making it the ninth most multicultural town in the world.

Long and rich history And can you blame them for wanting to live here? As the capital of a country with a long and rich history, the city feels like an open-air exposition of art throughout the centuries. The gold-covered, Gothic

main square is one of the city’s main attractions. While strolling through its surrounding streets, you travel five centuries into the future to the ‘fin-de-siècle’ of Victor Horta. As the pioneer of Art Nouveau, he caused an architectural revolution in Paris, Barcelona and many other cities. Since Brussels counts as home to a myriad of these amazing houses, renting or buying one of these to live in is way more realistic than you might think.

be on your to-do list: as should the Atomium, a mammoth construction of nine iron balls, interconnected as if it was a huge atom. The building was built for the world expo in Brussels in 1958 and continues to amaze today. For a few weeks a year, the Belgian king also opens the doors to the royal palace and his stunning greenhouses. If you are lucky enough to be in the city when he does, it is an opportunity you should grasp.

A city of surprises

Brussels cannot wait to surprise and astonish you. So, get on your way to the city of waffles, chocolate, fries and beer and, who knows, you might never want to leave.

If you are not looking for a new home, you can always just come to visit Brussels. Manneken Pis, Mont des Arts and the iconic Rue des Bouchers should definitely