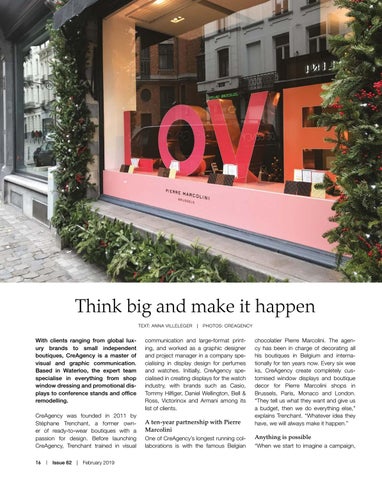 With clients ranging from global luxury brands to small independent boutiques, CreAgency is a master of visual and graphic communication. Based in Waterloo, the expert team specialise in everything from shop window dressing and promotional displays to conference stands and office remodelling. CreAgency was founded in 2011 by Stéphane Trenchant, a former owner of ready-to-wear boutiques with a passion for design. Before launching CreAgency, Trenchant trained in visual 16  |  Issue 62  |  February 2019

communication and large-format printing, and worked as a graphic designer and project manager in a company specialising in display design for perfumes and watches. Initially, CreAgency specialised in creating displays for the watch industry, with brands such as Casio, Tommy Hilfiger, Daniel Wellington, Bell &amp; Ross, Victorinox and Armani among its list of clients.

chocolatier Pierre Marcolini. The agency has been in charge of decorating all his boutiques in Belgium and internationally for ten years now. Every six wee ks, CreAgency create completely customised window displays and boutique decor for Pierre Marcolini shops in Brussels, Paris, Monaco and London. “They tell us what they want and give us a budget, then we do everything else,” explains Trenchant. “Whatever idea they have, we will always make it happen.”

Anything is possible “When we start to imagine a campaign,