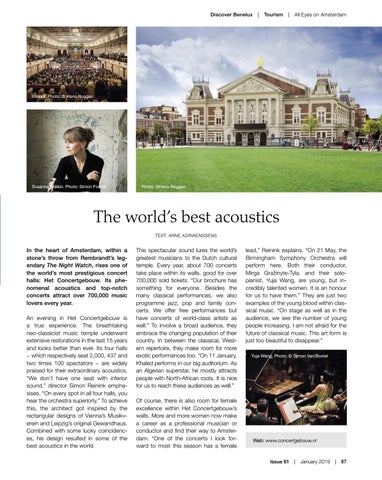 In the heart of Amsterdam, within a stone’s throw from Rembrandt’s legendary The Night Watch, rises one of the world’s most prestigious concert halls: Het Concertgebouw. Its phenomenal acoustics and top-notch concerts attract over 700,000 music lovers every year. An evening in Het Concertgebouw is a true experience. The breathtaking neo-classicist music temple underwent extensive restorations in the last 15 years and looks better than ever. Its four halls − which respectively seat 2,000, 437 and two times 100 spectators − are widely praised for their extraordinary acoustics. “We don’t have one seat with inferior sound,” director Simon Reinink emphasises. “On every spot in all four halls, you hear the orchestra superiorly.” To achieve this, the architect got inspired by the rectangular designs of Vienna’s Musikverein and Leipzig’s original Gewandhaus. Combined with some lucky coincidences, his design resulted in some of the best acoustics in the world.

This spectacular sound lures the world’s greatest musicians to the Dutch cultural temple. Every year, about 700 concerts take place within its walls, good for over 700,000 sold tickets. “Our brochure has something for everyone. Besides the many classical performances, we also programme jazz, pop and family concerts. We offer free performances but have concerts of world-class artists as well.” To involve a broad audience, they embrace the changing population of their country. In between the classical, Western repertoire, they make room for more exotic performances too. “On 11 January, Khaled performs in our big auditorium. As an Algerian superstar, he mostly attracts people with North-African roots. It is nice for us to reach these audiences as well.” Of course, there is also room for female excellence within Het Concertgebouw’s walls. More and more women now make a career as a professional musician or conductor and find their way to Amsterdam. “One of the concerts I look forward to most this season has a female

lead,” Reinink explains. “On 21 May, the Birmingham Symphony Orchestra will perform here. Both their conductor, Mirga Gražinyte-Tyla, and their solopianist, Yuja Wang, are young, but incredibly talented women. It is an honour for us to have them.” They are just two examples of the young blood within classical music. “On stage as well as in the audience, we see the number of young people increasing. I am not afraid for the future of classical music. This art form is just too beautiful to disappear.” Yuja Wang. Photo: © Simon Van Boxtel