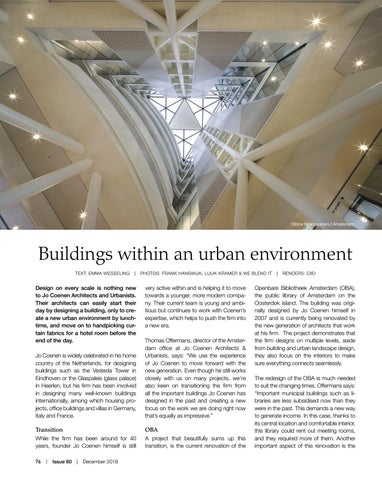 Design on every scale is nothing new to Jo Coenen Architects and Urbanists. Their architects can easily start their day by designing a building, only to create a new urban environment by lunchtime, and move on to handpicking curtain fabrics for a hotel room before the end of the day.

very active within and is helping it to move towards a younger, more modern company. Their current team is young and ambitious but continues to work with Coenen’s expertise, which helps to push the firm into a new era.

Jo Coenen is widely celebrated in his home country of the Netherlands, for designing buildings such as the Vesteda Tower in Eindhoven or the Glaspaleis (glass palace) in Heerlen, but his firm has been involved in designing many well-known buildings internationally, among which housing projects, office buildings and villas in Germany, Italy and France.

Thomas Offermans, director of the Amsterdam office at Jo Coenen Architects & Urbanists, says: “We use the experience of Jo Coenen to move forward with the new generation. Even though he still works closely with us on many projects, we’re also keen on transitioning the firm from all the important buildings Jo Coenen has designed in the past and creating a new focus on the work we are doing right now that’s equally as impressive.”

While the firm has been around for 40 years, founder Jo Coenen himself is still

A project that beautifully sums up this transition, is the current renovation of the

Openbare Bibliotheek Amsterdam (OBA), the public library of Amsterdam on the Oosterdok island. The building was originally designed by Jo Coenen himself in 2007 and is currently being renovated by the new generation of architects that work at his firm. The project demonstrates that the firm designs on multiple levels, aside from building and urban landscape design, they also focus on the interiors to make sure everything connects seamlessly. The redesign of the OBA is much needed to suit the changing times. Offermans says: “Important municipal buildings such as libraries are less subsidised now than they were in the past. This demands a new way to generate income. In this case, thanks to its central location and comfortable interior, this library could rent out meeting rooms, and they required more of them. Another important aspect of this renovation is the