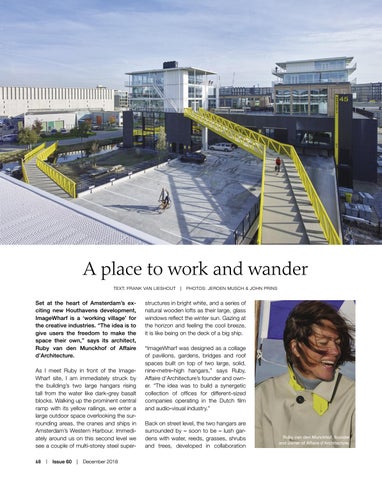 Set at the heart of Amsterdam’s exciting new Houthavens development, ImageWharf is a ‘working village’ for the creative industries. “The idea is to give users the freedom to make the space their own,” says its architect, Ruby van den Munckhof of Affaire d’Architecture. As I meet Ruby in front of the ImageWharf site, I am immediately struck by the building’s two large hangars rising tall from the water like dark-grey basalt blocks. Walking up the prominent central ramp with its yellow railings, we enter a large outdoor space overlooking the surrounding areas, the cranes and ships in Amsterdam’s Western Harbour. Immediately around us on this second level we see a couple of multi-storey steel super68  |  Issue 60  |  December 2018

structures in bright white, and a series of natural wooden lofts as their large, glass windows reflect the winter sun. Gazing at the horizon and feeling the cool breeze, it is like being on the deck of a big ship. “ImageWharf was designed as a collage of pavilions, gardens, bridges and roof spaces built on top of two large, solid, nine-metre-high hangars,” says Ruby, Affaire d’Architecture’s founder and owner. “The idea was to build a synergetic collection of offices for different-sized companies operating in the Dutch film and audio-visual industry.” Back on street level, the two hangars are surrounded by – soon to be – lush gardens with water, reeds, grasses, shrubs and trees, developed in collaboration