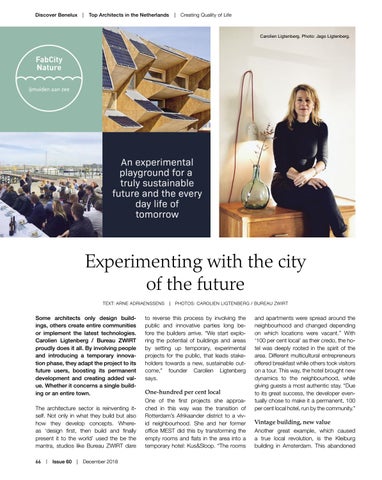 to reverse this process by involving the public and innovative parties long before the builders arrive. “We start exploring the potential of buildings and areas by setting up temporary, experimental projects for the public, that leads stakeholders towards a new, sustainable outcome,” founder Carolien Ligtenberg says.

Some architects only design buildings, others create entire communities or implement the latest technologies. Carolien Ligtenberg / Bureau ZWIRT proudly does it all. By involving people and introducing a temporary innovation phase, they adapt the project to its future users, boosting its permanent development and creating added value. Whether it concerns a single building or an entire town.

The architecture sector is reinventing itself. Not only in what they build but also how they develop concepts. Whereas ‘design first, then build and finally present it to the world’ used the be the mantra, studios like Bureau ZWIRT dare

One of the first projects she approached in this way was the transition of Rotterdam’s Afrikaander district to a vivid neighbourhood. She and her former office MEST did this by transforming the empty rooms and flats in the area into a temporary hotel: Kus&amp;Sloop. “The rooms

and apartments were spread around the neighbourhood and changed depending on which locations were vacant.” With ‘100 per cent local’ as their credo, the hotel was deeply rooted in the spirit of the area. Different multicultural entrepreneurs offered breakfast while others took visitors on a tour. This way, the hotel brought new dynamics to the neighbourhood, while giving guests a most authentic stay. “Due to its great success, the developer eventually chose to make it a permanent, 100 per cent local hotel, run by the community.”

Vintage building, new value Another great example, which caused a true local revolution, is the Kleiburg building in Amsterdam. This abandoned