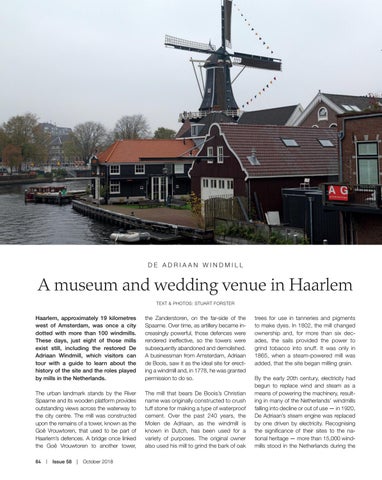 Haarlem, approximately 19 kilometres west of Amsterdam, was once a city dotted with more than 100 windmills. These days, just eight of those mills exist still, including the restored De Adriaan Windmill, which visitors can tour with a guide to learn about the history of the site and the roles played by mills in the Netherlands.

the Zanderstoren, on the far-side of the Spaarne. Over time, as artillery became increasingly powerful, those defences were rendered ineffective, so the towers were subsequently abandoned and demolished. A businessman from Amsterdam, Adriaan de Boois, saw it as the ideal site for erecting a windmill and, in 1778, he was granted permission to do so.

The urban landmark stands by the River Spaarne and its wooden platform provides outstanding views across the waterway to the city centre. The mill was constructed upon the remains of a tower, known as the Goê Vrouwtoren, that used to be part of Haarlem’s defences. A bridge once linked the Goê Vrouwtoren to another tower,

The mill that bears De Boois’s Christian name was originally constructed to crush tuff stone for making a type of waterproof cement. Over the past 240 years, the Molen de Adriaan, as the windmill is known in Dutch, has been used for a variety of purposes. The original owner also used his mill to grind the bark of oak

trees for use in tanneries and pigments to make dyes. In 1802, the mill changed ownership and, for more than six decades, the sails provided the power to grind tobacco into snuff. It was only in 1865, when a steam-powered mill was added, that the site began milling grain. By the early 20th century, electricity had begun to replace wind and steam as a means of powering the machinery, resulting in many of the Netherlands’ windmills falling into decline or out of use — in 1920, De Adriaan’s steam engine was replaced by one driven by electricity. Recognising the significance of their sites to the national heritage — more than 15,000 windmills stood in the Netherlands during the