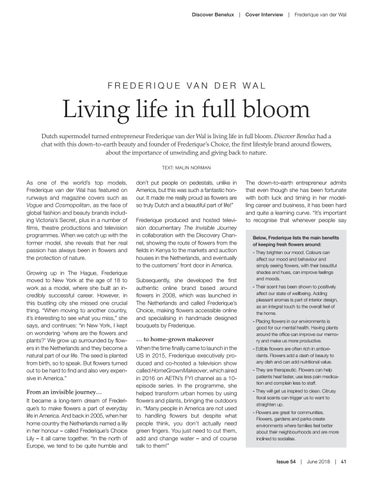 As one of the world’s top models, Frederique van der Wal has featured on runways and magazine covers such as Vogue and Cosmopolitan, as the face of global fashion and beauty brands including Victoria’s Secret, plus in a number of films, theatre productions and television programmes. When we catch up with the former model, she reveals that her real passion has always been in flowers and the protection of nature. Growing up in The Hague, Frederique moved to New York at the age of 18 to work as a model, where she built an incredibly successful career. However, in this bustling city she missed one crucial thing. “When moving to another country, it’s interesting to see what you miss,” she says, and continues: “in New York, I kept on wondering ‘where are the flowers and plants?’ We grow up surrounded by flowers in the Netherlands and they become a natural part of our life. The seed is planted from birth, so to speak. But flowers turned out to be hard to find and also very expensive in America.”

From an invisible journey… It became a long-term dream of Frederique’s to make flowers a part of everyday life in America. And back in 2005, when her home country the Netherlands named a lily in her honour – called Frederique’s Choice Lily – it all came together. “In the north of Europe, we tend to be quite humble and

don’t put people on pedestals, unlike in America, but this was such a fantastic honour. It made me really proud as flowers are so truly Dutch and a beautiful part of life!” Frederique produced and hosted television documentary The Invisible Journey in collaboration with the Discovery Channel, showing the route of flowers from the fields in Kenya to the markets and auction houses in the Netherlands, and eventually to the customers’ front door in America. Subsequently, she developed the first authentic online brand based around flowers in 2008, which was launched in The Netherlands and called Frederique’s Choice, making flowers accessible online and specialising in handmade designed bouquets by Frederique.

… to home-grown makeover When the time finally came to launch in the US in 2015, Frederique executively produced and co-hosted a television show called HomeGrownMakeover, which aired in 2016 on AETN’s FYI channel as a 10episode series. In the programme, she helped transform urban homes by using flowers and plants, bringing the outdoors in. “Many people in America are not used to handling flowers but despite what people think, you don’t actually need green fingers. You just need to cut them, add and change water – and of course talk to them!”

The down-to-earth entrepreneur admits that even though she has been fortunate with both luck and timing in her modelling career and business, it has been hard and quite a learning curve. “It’s important to recognise that whenever people say Below, Frederique lists the main benefits of keeping fresh flowers around: - They brighten our mood. Colours can affect our mood and behaviour and simply seeing flowers, with their beautiful shades and hues, can improve feelings and moods. - Their scent has been shown to positively affect our state of wellbeing. Adding pleasant aromas is part of interior design, as an integral touch to the overall feel of the home. - Placing flowers in our environments is good for our mental health. Having plants around the office can improve our memory and make us more productive. - Edible flowers are often rich in antioxidants. Flowers add a dash of beauty to any dish and can add nutritional value. - They are therapeutic. Flowers can help patients heal faster, use less pain medication and complain less to staff. - They will get us inspired to clean. Citrusy floral scents can trigger us to want to straighten up. - Flowers are great for communities. Flowers, gardens and parks create environments where families feel better about their neighbourhoods and are more inclined to socialise.