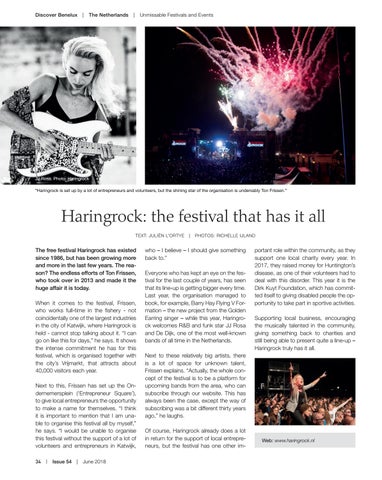 JJ Rosa. Photo: Haringrock “Haringrock is set up by a lot of entrepreneurs and volunteers, but the shining star of the organisation is undeniably Ton Frissen.”

The free festival Haringrock has existed since 1986, but has been growing more and more in the last few years. The reason? The endless efforts of Ton Frissen, who took over in 2013 and made it the huge affair it is today. When it comes to the festival, Frissen, who works full-time in the fishery - not coincidentally one of the largest industries in the city of Katwijk, where Haringrock is held - cannot stop talking about it. “I can go on like this for days,” he says. It shows the intense commitment he has for this festival, which is organised together with the city’s Vrijmarkt, that attracts about 40,000 visitors each year. Next to this, Frissen has set up the Ondernemersplein (‘Entrepreneur Square’), to give local entrepreneurs the opportunity to make a name for themselves. “I think it is important to mention that I am unable to organise this festival all by myself,” he says. “I would be unable to organise this festival without the support of a lot of volunteers and entrepreneurs in Katwijk, 34  |  Issue 54  |  June 2018

who – I believe – I should give something back to.” Everyone who has kept an eye on the festival for the last couple of years, has seen that its line-up is getting bigger every time. Last year, the organisation managed to book, for example, Barry Hay Flying V Formation – the new project from the Golden Earring singer – while this year, Haringrock welcomes R&amp;B and funk star JJ Rosa and De Dijk, one of the most well-known bands of all time in the Netherlands.

portant role within the community, as they support one local charity every year. In 2017, they raised money for Huntington’s disease, as one of their volunteers had to deal with this disorder. This year it is the Dirk Kuyt Foundation, which has committed itself to giving disabled people the opportunity to take part in sportive activities. Supporting local business, encouraging the musically talented in the community, giving something back to charities and still being able to present quite a line-up – Haringrock truly has it all.

Next to these relatively big artists, there is a lot of space for unknown talent, Frissen explains. “Actually, the whole concept of the festival is to be a platform for upcoming bands from the area, who can subscribe through our website. This has always been the case, except the way of subscribing was a bit different thirty years ago,” he laughs. Of course, Haringrock already does a lot in return for the support of local entrepreneurs, but the festival has one other im-