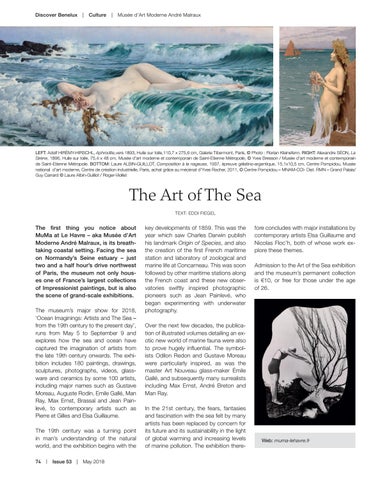 The Art of The Sea TEXT: EDDI FIEGEL

The first thing you notice about MuMa at Le Havre – aka Musée d’Art Moderne André Malraux, is its breathtaking coastal setting. Facing the sea on Normandy’s Seine estuary – just two and a half hour’s drive northwest of Paris, the museum not only houses one of France’s largest collections of Impressionist paintings, but is also the scene of grand-scale exhibitions. The museum’s major show for 2018, ‘Ocean Imaginings: Artists and The Sea – from the 19th century to the present day’, runs from May 5 to September 9 and explores how the sea and ocean have captured the imagination of artists from the late 19th century onwards. The exhibition includes 180 paintings, drawings, sculptures, photographs, videos, glassware and ceramics by some 100 artists, including major names such as Gustave Moreau, Auguste Rodin, Emile Gallé, Man Ray, Max Ernst, Brassaï and Jean Painlevé, to contemporary artists such as Pierre et Gilles and Elsa Guillaume. The 19th century was a turning point in man’s understanding of the natural world, and the exhibition begins with the 74  |  Issue 53  |  May 2018

key developments of 1859. This was the year which saw Charles Darwin publish his landmark Origin of Species, and also the creation of the first French maritime station and laboratory of zoological and marine life at Concarneau. This was soon followed by other maritime stations along the French coast and these new observatories swiftly inspired photographic pioneers such as Jean Painlevé, who began experimenting with underwater photography.

fore concludes with major installations by contemporary artists Elsa Guillaume and Nicolas Floc’h, both of whose work explore these themes. Admission to the Art of the Sea exhibition and the museum’s permanent collection is €10, or free for those under the age of 26.

Over the next few decades, the publication of illustrated volumes detailing an exotic new world of marine fauna were also to prove hugely influential. The symbolists Odilon Redon and Gustave Moreau were particularly inspired, as was the master Art Nouveau glass-maker Émile Gallé, and subsequently many surrealists including Max Ernst, André Breton and Man Ray. In the 21st century, the fears, fantasies and fascination with the sea felt by many artists has been replaced by concern for its future and its sustainability in the light of global warming and increasing levels of marine pollution. The exhibition there-