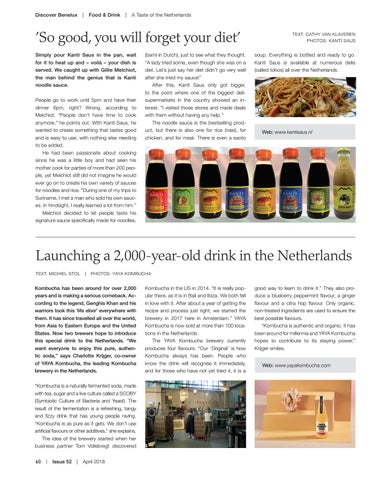 ’So good, you will forget your diet’ Simply pour Kanti Saus in the pan, wait for it to heat up and – voilà – your dish is served. We caught up with Gillie Melchiot, the man behind the genius that is Kanti noodle sauce. People go to work until 5pm and have their dinner 6pm, right? Wrong, according to Melchiot. “People don’t have time to cook anymore,” he points out. With Kanti Saus, he wanted to create something that tastes good and is easy to use, with nothing else needing to be added. He had been passionate about cooking since he was a little boy and had seen his mother cook for parties of more than 200 people, yet Melchiot still did not imagine he would ever go on to create his own variety of sauces for noodles and rice. “During one of my trips to Suriname, I met a man who sold his own sauces. In hindsight, I really learned a lot from him.” Melchiot decided to let people taste his signature sauce specifically made for noodles,

(bami in Dutch), just to see what they thought. “A lady tried some, even though she was on a diet. Let’s just say her diet didn’t go very well after she tried my sauce!’’ After this, Kanti Saus only got bigger, to the point where one of the biggest delisupermarkets in the country showed an interest. “I visited those stores and made deals with them without having any help.’’ The noodle sauce is the bestselling product, but there is also one for rice (nasi), for chicken, and for meat. There is even a saoto

soup. Everything is bottled and ready to go. Kanti Saus is available at numerous delis (called tokos) all over the Netherlands.

Kombucha has been around for over 2,000 years and is making a serious comeback. According to the legend, Genghis Khan and his warriors took this ‘life elixir’ everywhere with them. It has since travelled all over the world, from Asia to Eastern Europe and the United States. Now two brewers hope to introduce this special drink to the Netherlands. “We want everyone to enjoy this pure, authentic soda,” says Charlotte Krijger, co-owner of YAYA Kombucha, the leading Kombucha brewery in the Netherlands. “Kombucha is a naturally fermented soda, made with tea, sugar and a live culture called a SCOBY (Symbiotic Culture of Bacteria and Yeast). The result of the fermentation is a refreshing, tangy and fizzy drink that has young people raving. “Kombucha is as pure as it gets. We don’t use artificial flavours or other additives,” she explains. The idea of the brewery started when her business partner Tom Vollebregt discovered 60  |  Issue 52  |  April 2018

Kombucha in the US in 2014. “It is really popular there, as it is in Bali and Ibiza. We both fell in love with it. After about a year of getting the recipe and process just right, we started the brewery in 2017 here in Amsterdam.” YAYA Kombucha is now sold at more than 100 locations in the Netherlands. The YAYA Kombucha brewery currently produces four flavours. “Our ‘Original’ is how Kombucha always has been. People who know the drink will recognise it immediately, and for those who have not yet tried it, it is a

good way to learn to drink it.” They also produce a blueberry peppermint flavour, a ginger flavour and a citra hop flavour. Only organic, non-treated ingredients are used to ensure the best possible flavours. “Kombucha is authentic and organic. It has been around for millennia and YAYA Kombucha hopes to contribute to its staying power,” Krijger smiles. Web: www.yayakombucha.com