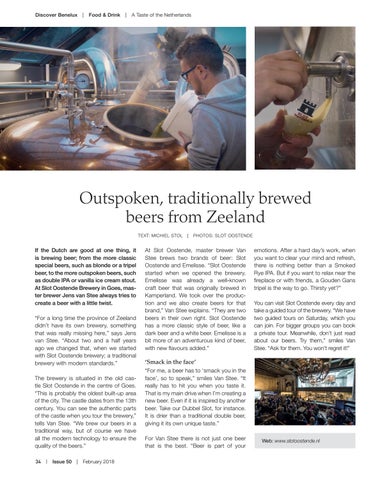 If the Dutch are good at one thing, it is brewing beer; from the more classic special beers, such as blonde or a tripel beer, to the more outspoken beers, such as double IPA or vanilla ice cream stout. At Slot Oostende Brewery in Goes, master brewer Jens van Stee always tries to create a beer with a little twist. “For a long time the province of Zeeland didn’t have its own brewery, something that was really missing here,” says Jens van Stee. “About two and a half years ago we changed that, when we started with Slot Oostende brewery; a traditional brewery with modern standards.” The brewery is situated in the old castle Slot Oostende in the centre of Goes. “This is probably the oldest built-up area of the city. The castle dates from the 13th century. You can see the authentic parts of the castle when you tour the brewery,” tells Van Stee. “We brew our beers in a traditional way, but of course we have all the modern technology to ensure the quality of the beers.” 34  |  Issue 50  |  February 2018

At Slot Oostende, master brewer Van Stee brews two brands of beer: Slot Oostende and Emelisse. “Slot Oostende started when we opened the brewery. Emelisse was already a well-known craft beer that was originally brewed in Kamperland. We took over the production and we also create beers for that brand,” Van Stee explains. “They are two beers in their own right. Slot Oostende has a more classic style of beer, like a dark beer and a white beer. Emelisse is a bit more of an adventurous kind of beer, with new flavours added.”

emotions. After a hard day’s work, when you want to clear your mind and refresh, there is nothing better than a Smoked Rye IPA. But if you want to relax near the fireplace or with friends, a Gouden Gans tripel is the way to go. Thirsty yet?” You can visit Slot Oostende every day and take a guided tour of the brewery. “We have two guided tours on Saturday, which you can join. For bigger groups you can book a private tour. Meanwhile, don’t just read about our beers. Try them,” smiles Van Stee. “Ask for them. You won’t regret it!”

‘Smack in the face’ “For me, a beer has to ‘smack you in the face’, so to speak,” smiles Van Stee. “It really has to hit you when you taste it. That is my main drive when I’m creating a new beer. Even if it is inspired by another beer. Take our Dubbel Slot, for instance. It is drier than a traditional double beer, giving it its own unique taste.” For Van Stee there is not just one beer that is the best. “Beer is part of your