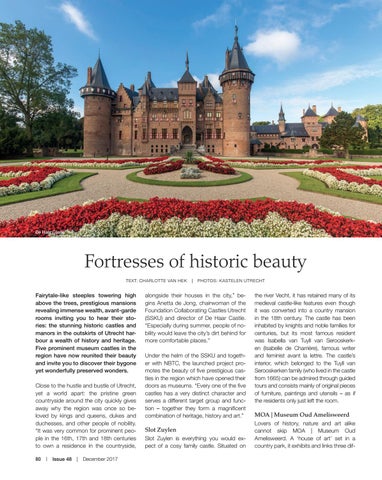 Fairytale-like steeples towering high above the trees, prestigious mansions revealing immense wealth, avant-garde rooms inviting you to hear their stories: the stunning historic castles and manors in the outskirts of Utrecht harbour a wealth of history and heritage. Five prominent museum castles in the region have now reunited their beauty and invite you to discover their bygone yet wonderfully preserved wonders. Close to the hustle and bustle of Utrecht, yet a world apart: the pristine green countryside around the city quickly gives away why the region was once so beloved by kings and queens, dukes and duchesses, and other people of nobility. “It was very common for prominent people in the 16th, 17th and 18th centuries to own a residence in the countryside, 80  |  Issue 48  |  December 2017

alongside their houses in the city,” begins Anetta de Jong, chairwoman of the Foundation Collaborating Castles Utrecht (SSKU) and director of De Haar Castle. “Especially during summer, people of nobility would leave the city’s dirt behind for more comfortable places.” Under the helm of the SSKU and together with NBTC, the launched project promotes the beauty of five prestigious castles in the region which have opened their doors as museums. “Every one of the five castles has a very distinct character and serves a different target group and function – together they form a magnificent combination of heritage, history and art.”

Slot Zuylen Slot Zuylen is everything you would expect of a cosy family castle. Situated on

the river Vecht, it has retained many of its medieval castle-like features even though it was converted into a country mansion in the 18th century. The castle has been inhabited by knights and noble families for centuries, but its most famous resident was Isabella van Tuyll van Serooskerken (Isabelle de Charrière), famous writer and feminist avant la lettre. The castle’s interior, which belonged to the Tuyll van Serooskerken family (who lived in the castle from 1665) can be admired through guided tours and consists mainly of original pieces of furniture, paintings and utensils – as if the residents only just left the room.