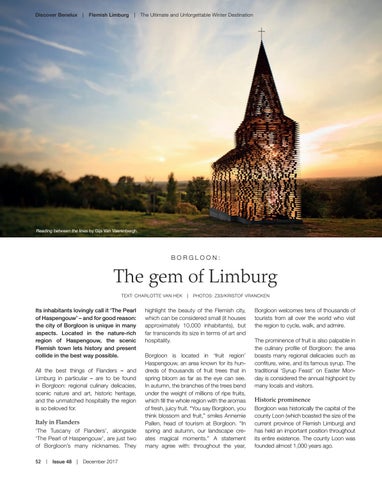 Reading between the lines by Gijs Van Vaerenbergh.

Its inhabitants lovingly call it ‘The Pearl of Haspengouw’ – and for good reason: the city of Borgloon is unique in many aspects. Located in the nature-rich region of Haspengouw, the scenic Flemish town lets history and present collide in the best way possible. All the best things of Flanders – and Limburg in particular – are to be found in Borgloon: regional culinary delicacies, scenic nature and art, historic heritage, and the unmatched hospitality the region is so beloved for.

Italy in Flanders ‘The Tuscany of Flanders’, alongside ‘The Pearl of Haspengouw’, are just two of Borgloon’s many nicknames. They 52  |  Issue 48  |  December 2017

highlight the beauty of the Flemish city, which can be considered small (it houses approximately 10,000 inhabitants), but far transcends its size in terms of art and hospitality. Borgloon is located in ‘fruit region’ Haspengouw, an area known for its hundreds of thousands of fruit trees that in spring bloom as far as the eye can see. In autumn, the branches of the trees bend under the weight of millions of ripe fruits, which fill the whole region with the aromas of fresh, juicy fruit. “You say Borgloon, you think blossom and fruit,” smiles Annemie Pallen, head of tourism at Borgloon. “In spring and autumn, our landscape creates magical moments.” A statement many agree with: throughout the year,

Borgloon welcomes tens of thousands of tourists from all over the world who visit the region to cycle, walk, and admire. The prominence of fruit is also palpable in the culinary profile of Borgloon: the area boasts many regional delicacies such as confiture, wine, and its famous syrup. The traditional ‘Syrup Feast’ on Easter Monday is considered the annual highpoint by many locals and visitors.

Historic prominence Borgloon was historically the capital of the county Loon (which boasted the size of the current province of Flemish Limburg) and has held an important position throughout its entire existence. The county Loon was founded almost 1,000 years ago.