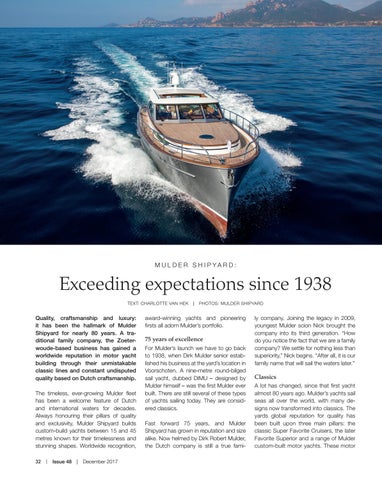 Quality, craftsmanship and luxury: it has been the hallmark of Mulder Shipyard for nearly 80 years. A traditional family company, the Zoeterwoude-based business has gained a worldwide reputation in motor yacht building through their unmistakable classic lines and constant undisputed quality based on Dutch craftsmanship. The timeless, ever-growing Mulder fleet has been a welcome feature of Dutch and international waters for decades. Always honouring their pillars of quality and exclusivity, Mulder Shipyard builds custom-build yachts between 15 and 45 metres known for their timelessness and stunning shapes. Worldwide recognition, 32  |  Issue 48  |  December 2017

75 years of excellence For Mulder’s launch we have to go back to 1938, when Dirk Mulder senior established his business at the yard’s location in Voorschoten. A nine-metre round-bilged sail yacht, dubbed DIMU – designed by Mulder himself – was the first Mulder ever built. There are still several of these types of yachts sailing today. They are considered classics. Fast forward 75 years, and Mulder Shipyard has grown in reputation and size alike. Now helmed by Dirk Robert Mulder, the Dutch company is still a true fami-

ly company. Joining the legacy in 2009, youngest Mulder scion Nick brought the company into its third generation. “How do you notice the fact that we are a family company? We settle for nothing less than superiority,” Nick begins. “After all, it is our family name that will sail the waters later.”

Classics A lot has changed, since that first yacht almost 80 years ago. Mulder’s yachts sail seas all over the world, with many designs now transformed into classics. The yards global reputation for quality has been built upon three main pillars: the classic Super Favorite Cruisers, the later Favorite Superior and a range of Mulder custom-built motor yachts. These motor