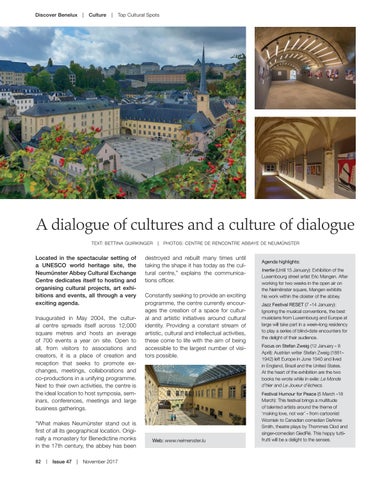 Located in the spectacular setting of a UNESCO world heritage site, the Neumünster Abbey Cultural Exchange Centre dedicates itself to hosting and organising cultural projects, art exhibitions and events, all through a very exciting agenda. Inaugurated in May 2004, the cultural centre spreads itself across 12,000 square metres and hosts an average of 700 events a year on site. Open to all, from visitors to associations and creators, it is a place of creation and reception that seeks to promote exchanges, meetings, collaborations and co-productions in a unifying programme. Next to their own activities, the centre is the ideal location to host symposia, seminars, conferences, meetings and large business gatherings. “What makes Neumünster stand out is first of all its geographical location. Originally a monastery for Benedictine monks in the 17th century, the abbey has been 82  |  Issue 47  |  November 2017

destroyed and rebuilt many times until taking the shape it has today as the cultural centre,” explains the communications officer. Constantly seeking to provide an exciting programme, the centre currently encourages the creation of a space for cultural and artistic initiatives around cultural identity. Providing a constant stream of artistic, cultural and intellectual activities, these come to life with the aim of being accessible to the largest number of visitors possible.

Inertie (Until 15 January): Exhibition of the Luxembourg street artist Eric Mangen. After working for two weeks in the open air on the Neimënster square, Mangen exhibits his work within the cloister of the abbey. Jazz Festival RESET (7 -14 January): Ignoring the musical conventions, the best musicians from Luxembourg and Europe at large will take part in a week-long residency to play a series of blind-date encounters for the delight of their audience. Focus on Stefan Zweig (12 January - 8 April): Austrian writer Stefan Zweig (18811942) left Europe in June 1940 and lived in England, Brazil and the United States. At the heart of the exhibition are the two books he wrote while in exile: Le Monde d’hier and Le Joueur d’échecs. Festival Humour for Peace (5 March -18 March): This festival brings a multitude of talented artists around the theme of ‘making love, not war’ - from cartoonist Wozniak to Canadian comedian DeAnne Smith, theatre plays by Thommes Clod and singer-comedian GiedRé. This happy tuttifrutti will be a delight to the senses.