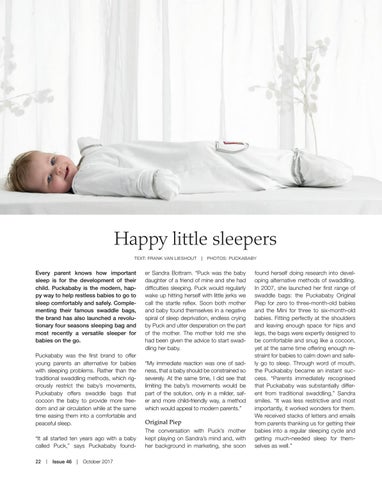 Every parent knows how important sleep is for the development of their child. Puckababy is the modern, happy way to help restless babies to go to sleep comfortably and safely. Complementing their famous swaddle bags, the brand has also launched a revolutionary four seasons sleeping bag and most recently a versatile sleeper for babies on the go.

er Sandra Bottram. “Puck was the baby daughter of a friend of mine and she had difficulties sleeping. Puck would regularly wake up hitting herself with little jerks we call the startle reflex. Soon both mother and baby found themselves in a negative spiral of sleep deprivation, endless crying by Puck and utter desperation on the part of the mother. The mother told me she had been given the advice to start swaddling her baby.

Puckababy was the first brand to offer young parents an alternative for babies with sleeping problems. Rather than the traditional swaddling methods, which rigorously restrict the baby’s movements, Puckababy offers swaddle bags that cocoon the baby to provide more freedom and air circulation while at the same time easing them into a comfortable and peaceful sleep.

“It all started ten years ago with a baby called Puck,” says Puckababy found-

The conversation with Puck’s mother kept playing on Sandra’s mind and, with her background in marketing, she soon

“My immediate reaction was one of sadness, that a baby should be constrained so severely. At the same time, I did see that limiting the baby’s movements would be part of the solution, only in a milder, safer and more child-friendly way, a method which would appeal to modern parents.”

found herself doing research into developing alternative methods of swaddling. In 2007, she launched her first range of swaddle bags: the Puckababy Original Piep for zero to three-month-old babies and the Mini for three to six-month-old babies. Fitting perfectly at the shoulders and leaving enough space for hips and legs, the bags were expertly designed to be comfortable and snug like a cocoon, yet at the same time offering enough restraint for babies to calm down and safely go to sleep. Through word of mouth, the Puckababy became an instant success. “Parents immediately recognised that Puckababy was substantially different from traditional swaddling,” Sandra smiles. “It was less restrictive and most importantly, it worked wonders for them. We received stacks of letters and emails from parents thanking us for getting their babies into a regular sleeping cycle and getting much-needed sleep for themselves as well.”