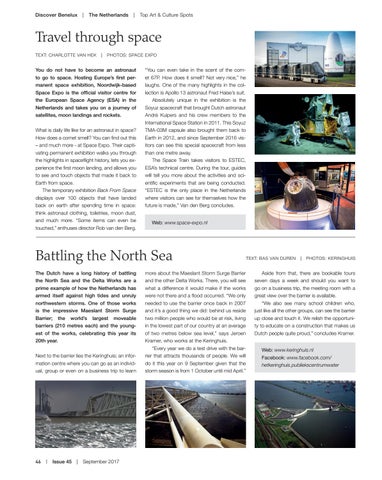 You do not have to become an astronaut to go to space. Hosting Europe’s first permanent space exhibition, Noordwijk-based Space Expo is the official visitor centre for the European Space Agency (ESA) in the Netherlands and takes you on a journey of satellites, moon landings and rockets. What is daily life like for an astronaut in space? How does a comet smell? You can find out this – and much more - at Space Expo. Their captivating permanent exhibition walks you through the highlights in spaceflight history, lets you experience the first moon landing, and allows you to see and touch objects that made it back to Earth from space. The temporary exhibition Back From Space displays over 100 objects that have landed back on earth after spending time in space: think astronaut clothing, toiletries, moon dust, and much more. “Some items can even be touched,” enthuses director Rob van den Berg.

“You can even take in the scent of the comet 67P. How does it smell? Not very nice,” he laughs. One of the many highlights in the collection is Apollo 13 astronaut Fred Haise’s suit. Absolutely unique in the exhibition is the Soyuz spacecraft that brought Dutch astronaut André Kuipers and his crew members to the International Space Station in 2011. This Soyuz TMA-03M capsule also brought them back to Earth in 2012, and since September 2016 visitors can see this special spacecraft from less than one metre away. The Space Train takes visitors to ESTEC, ESA’s technical centre. During the tour, guides will tell you more about the activities and scientific experiments that are being conducted. “ESTEC is the only place in the Netherlands where visitors can see for themselves how the future is made,” Van den Berg concludes. Web: www.space-expo.nl

Battling the North Sea The Dutch have a long history of battling the North Sea and the Delta Works are a prime example of how the Netherlands has armed itself against high tides and unruly northwestern storms. One of those works is the impressive Maeslant Storm Surge Barrier; the world’s largest moveable barriers (210 metres each) and the youngest of the works, celebrating this year its 20th year. Next to the barrier lies the Keringhuis; an information centre where you can go as an individual, group or even on a business trip to learn

more about the Maeslant Storm Surge Barrier and the other Delta Works. There, you will see what a difference it would make if the works were not there and a flood occurred. “We only needed to use the barrier once back in 2007 and it’s a good thing we did: behind us reside two million people who would be at risk, living in the lowest part of our country at an average of two metres below sea level,” says Jeroen Kramer, who works at the Keringhuis. “Every year we do a test drive with the barrier that attracts thousands of people. We will do it this year on 9 September given that the storm season is from 1 October until mid April.”

Aside from that, there are bookable tours seven days a week and should you want to go on a business trip, the meeting room with a great view over the barrier is available. “We also see many school children who, just like all the other groups, can see the barrier up close and touch it. We relish the opportunity to educate on a construction that makes us Dutch people quite proud,” concludes Kramer. Web: www.keringhuis.nl Facebook: www.facebook.com/ hetkeringhuis.publiekscentrumwater