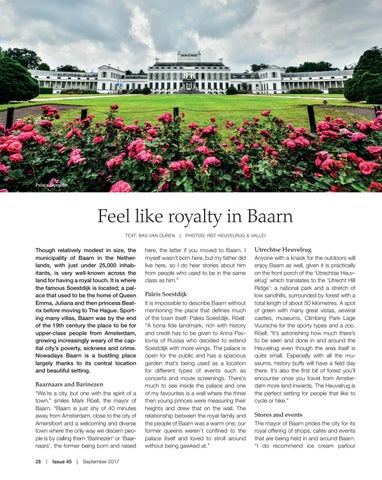 Though relatively modest in size, the municipality of Baarn in the Netherlands, with just under 25,000 inhabitants, is very well-known across the land for having a royal touch. It is where the famous Soestdijk is located; a palace that used to be the home of Queen Emma, Juliana and then princess Beatrix before moving to The Hague. Sporting many villas, Baarn was by the end of the 19th century the place to be for upper-class people from Amsterdam, growing increasingly weary of the capital city’s poverty, sickness and crime. Nowadays Baarn is a bustling place largely thanks to its central location and beautiful setting.

Baarnaars and Barinezen “We’re a city, but one with the spirit of a town,” smiles Mark Röell, the mayor of Baarn. “Baarn is just shy of 40 minutes away from Amsterdam, close to the city of Amersfoort and a welcoming and diverse town where the only way we discern people is by calling them ‘Barinezen’ or ‘Baarnaars’, the former being born and raised 28  |  Issue 45  |  September 2017

here, the latter if you moved to Baarn. I myself wasn’t born here, but my father did live here, so I do hear stories about him from people who used to be in the same class as him.”

Paleis Soestdijk It is impossible to describe Baarn without mentioning the place that defines much of the town itself: Paleis Soestdijk. Röell: “A bona fide landmark, rich with history and credit has to be given to Anna Pavlovna of Russia who decided to extend Soestdijk with more wings. The palace is open for the public and has a spacious garden that’s being used as a location for different types of events such as concerts and movie screenings. There’s much to see inside the palace and one of my favourites is a wall where the three then young princes were measuring their heights and drew that on the wall. The relationship between the royal family and the people of Baarn was a warm one; our former queens weren’t confined to the palace itself and loved to stroll around without being gawked at.”

Utrechtse Heuvelrug Anyone with a knack for the outdoors will enjoy Baarn as well, given it is practically on the front porch of the ‘Utrechtse Heuvelrug’ which translates to the ‘Utrecht Hill Ridge’: a national park and a stretch of low sandhills, surrounded by forest with a total length of about 50 kilometres. A spot of green with many great vistas, several castles, museums, Climbing Park Lage Vuursche for the sporty types and a zoo. Röell: “It’s astonishing how much there’s to be seen and done in and around the Heuvelrug even though the area itself is quite small. Especially with all the museums, history buffs will have a field day there. It’s also the first bit of forest you’ll encounter once you travel from Amsterdam more land inwards. The Heuvelrug is the perfect setting for people that like to cycle or hike.”

Stores and events The mayor of Baarn prides the city for its royal offering of shops, cafés and events that are being held in and around Baarn. “I do recommend ice cream parlour