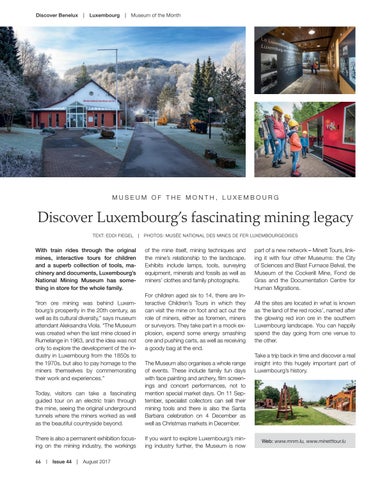 MUSEUM OF THE MONTH, LUXEMBOURG

With train rides through the original mines, interactive tours for children and a superb collection of tools, machinery and documents, Luxembourg’s National Mining Museum has something in store for the whole family. “Iron ore mining was behind Luxembourg’s prosperity in the 20th century, as well as its cultural diversity,” says museum attendant Aleksandra Viola. “The Museum was created when the last mine closed in Rumelange in 1963, and the idea was not only to explore the development of the industry in Luxembourg from the 1850s to the 1970s, but also to pay homage to the miners themselves by commemorating their work and experiences.” Today, visitors can take a fascinating guided tour on an electric train through the mine, seeing the original underground tunnels where the miners worked as well as the beautiful countryside beyond. There is also a permanent exhibition focusing on the mining industry, the workings 66  |  Issue 44  |  August 2017

of the mine itself, mining techniques and the mine’s relationship to the landscape. Exhibits include lamps, tools, surveying equipment, minerals and fossils as well as miners’ clothes and family photographs. For children aged six to 14, there are Interactive Children’s Tours in which they can visit the mine on foot and act out the role of miners, either as foremen, miners or surveyors. They take part in a mock explosion, expend some energy smashing ore and pushing carts, as well as receiving a goody bag at the end. The Museum also organises a whole range of events. These include family fun days with face painting and archery, film screenings and concert performances, not to mention special market days. On 11 September, specialist collectors can sell their mining tools and there is also the Santa Barbara celebration on 4 December as well as Christmas markets in December. If you want to explore Luxembourg’s mining industry further, the Museum is now

part of a new network – Minett Tours, linking it with four other Museums: the City of Sciences and Blast Furnace Belval, the Museum of the Cockerill Mine, Fond de Gras and the Documentation Centre for Human Migrations. All the sites are located in what is known as ‘the land of the red rocks’, named after the glowing red iron ore in the southern Luxembourg landscape. You can happily spend the day going from one venue to the other. Take a trip back in time and discover a real insight into this hugely important part of Luxembourg’s history.