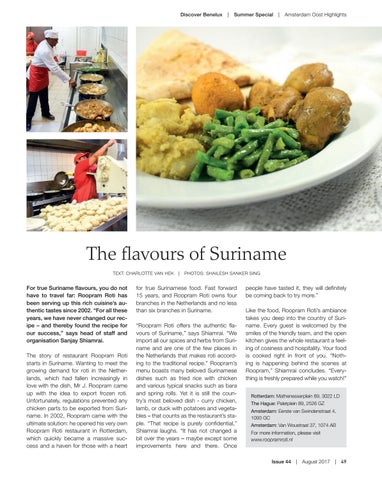 For true Suriname flavours, you do not have to travel far: Roopram Roti has been serving up this rich cuisine’s authentic tastes since 2002. “For all these years, we have never changed our recipe – and thereby found the recipe for our success,” says head of staff and organisation Sanjay Shiamrai. The story of restaurant Roopram Roti starts in Suriname. Wanting to meet the growing demand for roti in the Netherlands, which had fallen increasingly in love with the dish, Mr J. Roopram came up with the idea to export frozen roti. Unfortunately, regulations prevented any chicken parts to be exported from Suriname. In 2002, Roopram came with the ultimate solution: he opened his very own Roopram Roti restaurant in Rotterdam, which quickly became a massive success and a haven for those with a heart

for true Surinamese food. Fast forward 15 years, and Roopram Roti owns four branches in the Netherlands and no less than six branches in Suriname. “Roopram Roti offers the authentic flavours of Suriname,” says Shiamrai. “We import all our spices and herbs from Suriname and are one of the few places in the Netherlands that makes roti according to the traditional recipe.” Roopram’s menu boasts many beloved Surinamese dishes such as fried rice with chicken and various typical snacks such as bara and spring rolls. Yet it is still the country’s most beloved dish - curry chicken, lamb, or duck with potatoes and vegetables – that counts as the restaurant’s staple. “That recipe is purely confidential,” Shiamrai laughs. “It has not changed a bit over the years – maybe except some improvements here and there. Once

people have tasted it, they will definitely be coming back to try more.” Like the food, Roopram Roti’s ambiance takes you deep into the country of Suriname. Every guest is welcomed by the smiles of the friendly team, and the open kitchen gives the whole restaurant a feeling of cosiness and hospitality. Your food is cooked right in front of you. “Nothing is happening behind the scenes at Roopram,” Shiamrai concludes. “Everything is freshly prepared while you watch!” Rotterdam: Mathenesserplein 89, 3022 LD The Hague: Paletplein 89, 2526 GZ Amsterdam: Eerste van Swindenstraat 4, 1093 GC Amsterdam: Van Woustraat 37, 1074 AB