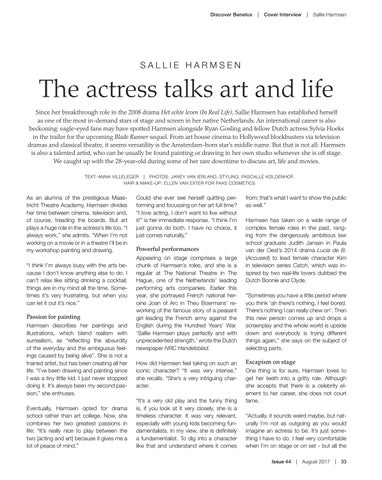 The actress talks art and life Since her breakthrough role in the 2008 drama Het echte leven (In Real Life), Sallie Harmsen has established herself as one of the most in-demand stars of stage and screen in her native Netherlands. An international career is also beckoning: eagle-eyed fans may have spotted Harmsen alongside Ryan Gosling and fellow Dutch actress Sylvia Hoeks in the trailer for the upcoming Blade Runner sequel. From art house cinema to Hollywood blockbusters via television dramas and classical theatre, it seems versatility is the Amsterdam-born star’s middle name. But that is not all: Harmsen is also a talented artist, who can be usually be found painting or drawing in her own studio whenever she is off stage. We caught up with the 28-year-old during some of her rare downtime to discuss art, life and movies. TEXT: ANNA VILLELEGER  |  PHOTOS: JANEY VAN IERLAND, STYLING: PASCALLE KOLDENHOF, HAIR & MAKE-UP: ELLEN VAN EXTER FOR FAAS COSMETICS

As an alumna of the prestigious Maastricht Theatre Academy, Harmsen divides her time between cinema, television and, of course, treading the boards. But art plays a huge role in the actress’s life too. “I always work,” she admits. “When I’m not working on a movie or in a theatre I’ll be in my workshop painting and drawing. “I think I’m always busy with the arts because I don’t know anything else to do. I can’t relax like sitting drinking a cocktail; things are in my mind all the time. Sometimes it’s very frustrating, but when you can let it out it’s nice.”

Passion for painting Harmsen describes her paintings and illustrations, which blend realism with surrealism, as “reflecting the absurdity of the everyday and the ambiguous feelings caused by being alive”. She is not a trained artist, but has been creating all her life. “I’ve been drawing and painting since I was a tiny little kid. I just never stopped doing it. It’s always been my second passion,” she enthuses.  Eventually, Harmsen opted for drama school rather than art college. Now, she combines her two greatest passions in life: “It’s really nice to play between the two [acting and art] because it gives me a lot of peace of mind.”

Could she ever see herself quitting performing and focussing on her art full time? “I love acting, I don’t want to live without it!” is her immediate response. “I think I’m just gonna do both. I have no choice, it just comes naturally.”

Powerful performances Appearing on stage comprises a large chunk of Harmsen’s roles, and she is a regular at The National Theatre in The Hague, one of the Netherlands’ leading performing arts companies. Earlier this year, she portrayed French national heroine Joan of Arc in Theu Boermans’ reworking of the famous story of a peasant girl leading the French army against the English during the Hundred Years’ War. ‘Sallie Harmsen plays perfectly and with unprecedented strength,’ wrote the Dutch newspaper NRC Handelsblad. How did Harmsen feel taking on such an iconic character? “It was very intense,” she recalls. “She’s a very intriguing character. “It’s a very old play and the funny thing is, if you look at it very closely, she is a timeless character. It was very relevant, especially with young kids becoming fundamentalists. In my view, she is definitely a fundamentalist. To dig into a character like that and understand where it comes

from; that’s what I want to show the public as well.” Harmsen has taken on a wide range of complex female roles in the past, ranging from the dangerously ambitious law school graduate Judith Jansen in Paula van der Oest’s 2014 drama Lucia de B. (Accused) to lead female character Kim in television series Catch, which was inspired by two real-life lovers dubbed the Dutch Bonnie and Clyde. “Sometimes you have a little period where you think ‘ah there’s nothing, I feel bored. There’s nothing I can really chew on’. Then this new person comes up and drops a screenplay and the whole world is upside down and everybody is trying different things again,” she says on the subject of selecting parts.

Escapism on stage One thing is for sure, Harmsen loves to get her teeth into a gritty role. Although she accepts that there is a celebrity element to her career, she does not court fame. “Actually, it sounds weird maybe, but naturally I’m not as outgoing as you would imagine an actress to be. It’s just something I have to do. I feel very comfortable when I’m on stage or on set - but all the Issue 44  |  August 2017  |  33