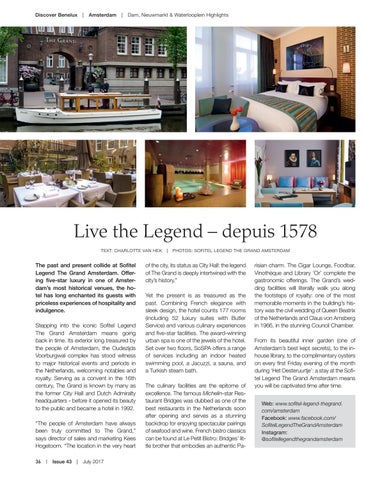 The past and present collide at Sofitel Legend The Grand Amsterdam. Offering five-star luxury in one of Amsterdam’s most historical venues, the hotel has long enchanted its guests with priceless experiences of hospitality and indulgence. Stepping into the iconic Sofitel Legend The Grand Amsterdam means going back in time. Its exterior long treasured by the people of Amsterdam, the Oudezijds Voorburgwal complex has stood witness to major historical events and periods in the Netherlands, welcoming notables and royalty. Serving as a convent in the 16th century, The Grand is known by many as the former City Hall and Dutch Admiralty headquarters - before it opened its beauty to the public and became a hotel in 1992. “The people of Amsterdam have always been truly committed to The Grand,” says director of sales and marketing Kees Hogetoorn. “The location in the very heart 36  |  Issue 43  |  July 2017

of the city, its status as City Hall: the legend of The Grand is deeply intertwined with the city’s history.” Yet the present is as treasured as the past. Combining French elegance with sleek design, the hotel counts 177 rooms (including 52 luxury suites with Butler Service) and various culinary experiences and five-star facilities. The award-winning urban spa is one of the jewels of the hotel. Set over two floors, SoSPA offers a range of services including an indoor heated swimming pool, a Jacuzzi, a sauna, and a Turkish steam bath. The culinary facilities are the epitome of excellence. The famous Michelin-star Restaurant Bridges was dubbed as one of the best restaurants in the Netherlands soon after opening and serves as a stunning backdrop for enjoying spectacular pairings of seafood and wine. French bistro classics can be found at Le Petit Bistro: Bridges’ little brother that embodies an authentic Pa-

risian charm. The Cigar Lounge, Foodbar, Vinothèque and Library ‘Or’ complete the gastronomic offerings. The Grand’s wedding facilities will literally walk you along the footsteps of royalty: one of the most memorable moments in the building’s history was the civil wedding of Queen Beatrix of the Netherlands and Claus von Amsberg in 1966, in the stunning Council Chamber. From its beautiful inner garden (one of Amsterdam’s best kept secrets), to the inhouse library, to the complimentary oysters on every first Friday evening of the month during ‘Het Oesteruurtje’: a stay at the Sofitel Legend The Grand Amsterdam means you will be captivated time after time. Web: www.sofitel-legend-thegrand. com/amsterdam Facebook: www.facebook.com/ SofitelLegendTheGrandAmsterdam Instagram: @sofitellegendthegrandamsterdam