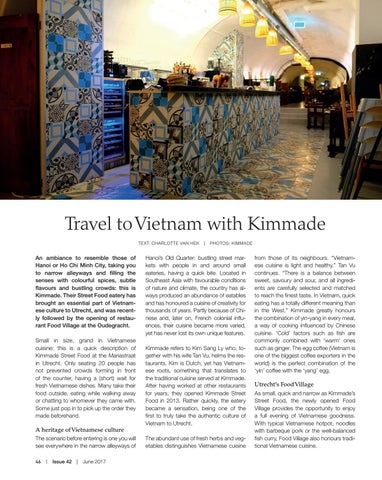 An ambiance to resemble those of Hanoi or Ho Chi Minh City, taking you to narrow alleyways and filling the senses with colourful spices, subtle flavours and bustling crowds: this is Kimmade. Their Street Food eatery has brought an essential part of Vietnamese culture to Utrecht, and was recently followed by the opening of restaurant Food Village at the Oudegracht. Small in size, grand in Vietnamese cuisine: this is a quick description of Kimmade Street Food at the Mariastraat in Utrecht. Only seating 20 people has not prevented crowds forming in front of the counter, having a (short) wait for fresh Vietnamese dishes. Many take their food outside, eating while walking away or chatting to whomever they came with. Some just pop in to pick up the order they made beforehand.

Hanoi’s Old Quarter: bustling street markets with people in and around small eateries, having a quick bite. Located in Southeast Asia with favourable conditions of nature and climate, the country has always produced an abundance of eatables and has honoured a cuisine of creativity for thousands of years. Partly because of Chinese and, later on, French colonial influences, their cuisine became more varied, yet has never lost its own unique features. Kimmade refers to Kim Sang Ly who, together with his wife Tan Vu, helms the restaurants. Kim is Dutch, yet has Vietnamese roots, something that translates to the traditional cuisine served at Kimmade. After having worked at other restaurants for years, they opened Kimmade Street Food in 2013. Rather quickly, the eatery became a sensation, being one of the first to truly take the authentic culture of Vietnam to Utrecht. The abundant use of fresh herbs and vegetables distinguishes Vietnamese cuisine

from those of its neighbours. “Vietnamese cuisine is light and healthy,” Tan Vu continues. “There is a balance between sweet, savoury and sour, and all ingredients are carefully selected and matched to reach the finest taste. In Vietnam, quick eating has a totally different meaning than in the West.” Kimmade greatly honours the combination of yin-yang in every meal, a way of cooking influenced by Chinese cuisine. ‘Cold’ factors such as fish are commonly combined with ‘warm’ ones such as ginger. The egg coffee (Vietnam is one of the biggest coffee exporters in the world) is the perfect combination of the ‘yin’ coffee with the ‘yang’ egg.