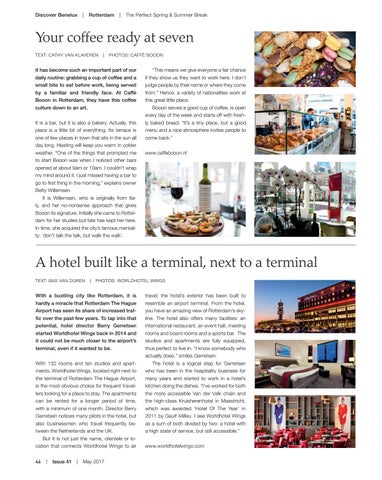 It has become such an important part of our daily routine: grabbing a cup of coffee and a small bite to eat before work, being served by a familiar and friendly face. At Caffè Booon in Rotterdam, they have this coffee culture down to an art. It is a bar, but it is also a bakery. Actually, this place is a little bit of everything. Its terrace is one of few places in town that sits in the sun all day long. Heating will keep you warm in colder weather. “One of the things that prompted me to start Booon was when I noticed other bars opened at about 9am or 10am. I couldn’t wrap my mind around it. I just missed having a bar to go to first thing in the morning,” explains owner Betty Willemsen. It is Willemsen, who is originally from Italy, and her no-nonsense approach that gives Booon its signature. Initially she came to Rotterdam for her studies but fate has kept her here. In time, she acquired the city’s famous mentality: ‘don’t talk the talk, but walk the walk’.

“This means we give everyone a fair chance if they show us they want to work here. I don’t judge people by their name or where they come from.” Hence, a variety of nationalities work at this great little place. Booon serves a good cup of coffee, is open every day of the week and starts off with freshly baked bread. “It’s a tiny place, but a good menu and a nice atmosphere invites people to come back.” www.caffebooon.nl

A hotel built like a terminal, next to a terminal TEXT: BAS VAN DUREN  |  PHOTOS: WORLDHOTEL WINGS

With a bustling city like Rotterdam, it is hardly a miracle that Rotterdam The Hague Airport has seen its share of increased traffic over the past few years. To tap into that potential, hotel director Berry Gerretsen started Worldhotel Wings back in 2014 and it could not be much closer to the airport’s terminal, even if it wanted to be. With 132 rooms and ten studios and apartments, Worldhotel Wings, located right next to the terminal of Rotterdam The Hague Airport, is the most obvious choice for frequent travellers looking for a place to stay. The apartments can be rented for a longer period of time, with a minimum of one month. Director Berry Gerretsen notices many pilots in the hotel, but also businessmen who travel frequently between the Netherlands and the UK. But it is not just the name, clientele or location that connects Worldhotel Wings to air 46  |  Issue 41  |  May 2017

travel; the hotel’s exterior has been built to resemble an airport terminal. From the hotel, you have an amazing view of Rotterdam’s skyline. The hotel also offers many facilities: an international restaurant, an event hall, meeting rooms and board rooms and a sports bar. The studios and apartments are fully equipped, thus perfect to live in. “I know somebody who actually does,” smiles Gerretsen. The hotel is a logical step for Gerretsen who has been in the hospitality business for many years and started to work in a hotel’s kitchen doing the dishes. “I’ve worked for both the more accessible Van der Valk chain and the high-class Kruisherenhotel in Maastricht, which was awarded ‘Hotel Of The Year’ in 2011 by Gault Millau. I see Worldhotel Wings as a sum of both divided by two: a hotel with a high state of service, but still accessible.” www.worldhotelwings.com