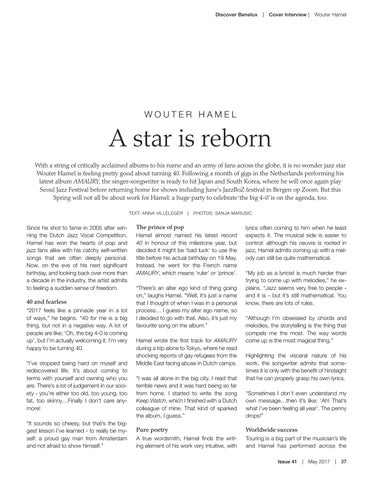 A star is reborn With a string of critically acclaimed albums to his name and an army of fans across the globe, it is no wonder jazz star Wouter Hamel is feeling pretty good about turning 40. Following a month of gigs in the Netherlands performing his latest album AMAURY, the singer-songwriter is ready to hit Japan and South Korea, where he will once again play Seoul Jazz Festival before returning home for shows including June’s JazzBoZ festival in Bergen op Zoom. But this Spring will not all be about work for Hamel: a huge party to celebrate ‘the big 4-0’ is on the agenda, too.  TEXT: ANNA VILLELEGER  |  PHOTOS: SANJA MARUSIC

Since he shot to fame in 2005 after winning the Dutch Jazz Vocal Competition, Hamel has won the hearts of pop and jazz fans alike with his catchy self-written songs that are often deeply personal. Now, on the eve of his next significant birthday, and looking back over more than a decade in the industry, the artist admits to feeling a sudden sense of freedom.

40 and fearless “2017 feels like a pinnacle year in a lot of ways,” he begins. “40 for me is a big thing, but not in a negative way. A lot of people are like; ‘Oh, the big 4-0 is coming up’, but I’m actually welcoming it. I’m very happy to be turning 40. “I’ve stopped being hard on myself and rediscovered life. It’s about coming to terms with yourself and owning who you are. There’s a lot of judgement in our society - you’re either too old, too young, too fat, too skinny…Finally I don’t care anymore! “It sounds so cheesy, but that’s the biggest lesson I’ve learned - to really be myself: a proud gay man from Amsterdam and not afraid to show himself.”

The prince of pop Hamel almost named his latest record 40 in honour of this milestone year, but decided it might be ‘bad luck’ to use the title before his actual birthday on 19 May. Instead, he went for the French name AMAURY, which means ‘ruler’ or ‘prince’. “There’s an alter ego kind of thing going on,” laughs Hamel. “Well, it’s just a name that I thought of when I was in a personal process… I guess my alter ego name, so I decided to go with that. Also, it’s just my favourite song on the album.” Hamel wrote the first track for AMAURY during a trip alone to Tokyo, where he read shocking reports of gay refugees from the Middle East facing abuse in Dutch camps. “I was all alone in the big city. I read that terrible news and it was hard being so far from home. I started to write the song Keep Watch, which I finished with a Dutch colleague of mine. That kind of sparked the album, I guess.”

lyrics often coming to him when he least expects it. The musical side is easier to control: although his oeuvre is rooted in jazz, Hamel admits coming up with a melody can still be quite mathematical. “My job as a lyricist is much harder than trying to come up with melodies,” he explains. “Jazz seems very free to people and it is - but it’s still mathematical. You know, there are lots of rules. “Although I’m obsessed by chords and melodies, the storytelling is the thing that compels me the most. The way words come up is the most magical thing.” Highlighting the visceral nature of his work, the songwriter admits that sometimes it is only with the benefit of hindsight that he can properly grasp his own lyrics. “Sometimes I don’t even understand my own message…then it’s like; ‘Ah! That’s what I’ve been feeling all year’. The penny drops!”

A true wordsmith, Hamel finds the writing element of his work very intuitive, with