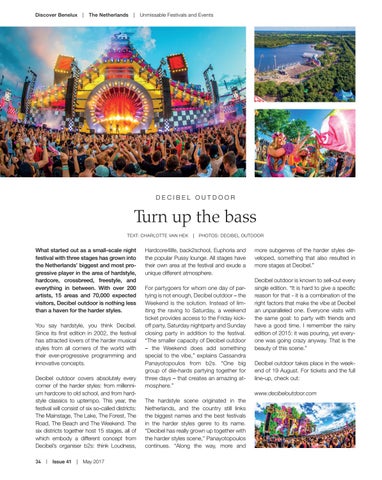 What started out as a small-scale night festival with three stages has grown into the Netherlands’ biggest and most progressive player in the area of hardstyle, hardcore, crossbreed, freestyle, and everything in between. With over 200 artists, 15 areas and 70,000 expected visitors, Decibel outdoor is nothing less than a haven for the harder styles. You say hardstyle, you think Decibel. Since its first edition in 2002, the festival has attracted lovers of the harder musical styles from all corners of the world with their ever-progressive programming and innovative concepts. Decibel outdoor covers absolutely every corner of the harder styles: from millennium hardcore to old school, and from hardstyle classics to uptempo. This year, the festival will consist of six so-called districts: The Mainstage, The Lake, The Forest, The Road, The Beach and The Weekend. The six districts together host 15 stages, all of which embody a different concept from Decibel’s organiser b2s: think Loudness, 34  |  Issue 41  |  May 2017

Hardcore4life, back2school, Euphoria and the popular Pussy lounge. All stages have their own area at the festival and exude a unique different atmosphere. For partygoers for whom one day of partying is not enough, Decibel outdoor – the Weekend is the solution. Instead of limiting the raving to Saturday, a weekend ticket provides access to the Friday kickoff party, Saturday nightparty and Sunday closing party in addition to the festival. “The smaller capacity of Decibel outdoor – the Weekend does add something special to the vibe,” explains Cassandra Panayotopoulos from b2s. “One big group of die-hards partying together for three days – that creates an amazing atmosphere.”

more subgenres of the harder styles developed, something that also resulted in more stages at Decibel.” Decibel outdoor is known to sell-out every single edition. “It is hard to give a specific reason for that - it is a combination of the right factors that make the vibe at Decibel an unparalleled one. Everyone visits with the same goal: to party with friends and have a good time. I remember the rainy edition of 2015: it was pouring, yet everyone was going crazy anyway. That is the beauty of this scene.” Decibel outdoor takes place in the weekend of 19 August. For tickets and the full line-up, check out: www.decibeloutdoor.com

The hardstyle scene originated in the Netherlands, and the country still links the biggest names and the best festivals in the harder styles genre to its name. “Decibel has really grown up together with the harder styles scene,” Panayotopoulos continues. “Along the way, more and