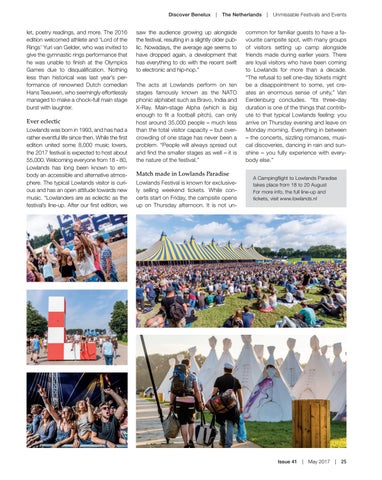 let, poetry readings, and more. The 2016 edition welcomed athlete and ‘Lord of the Rings’ Yuri van Gelder, who was invited to give the gymnastic rings performance that he was unable to finish at the Olympics Games due to disqualification. Nothing less than historical was last year’s performance of renowned Dutch comedian Hans Teeuwen, who seemingly effortlessly managed to make a chock-full main stage burst with laughter.

Ever eclectic Lowlands was born in 1993, and has had a rather eventful life since then. While the first edition united some 8,000 music lovers, the 2017 festival is expected to host about 55,000. Welcoming everyone from 18 - 80, Lowlands has long been known to embody an accessible and alternative atmosphere. The typical Lowlands visitor is curious and has an open attitude towards new music. “Lowlanders are as eclectic as the festival’s line-up. After our first edition, we

saw the audience growing up alongside the festival, resulting in a slightly older public. Nowadays, the average age seems to have dropped again, a development that has everything to do with the recent swift to electronic and hip-hop.” The acts at Lowlands perform on ten stages famously known as the NATO phonic alphabet such as Bravo, India and X-Ray. Main-stage Alpha (which is big enough to fit a football pitch), can only host around 35,000 people – much less than the total visitor capacity – but overcrowding of one stage has never been a problem. “People will always spread out and find the smaller stages as well – it is the nature of the festival.”

Match made in Lowlands Paradise Lowlands Festival is known for exclusively selling weekend tickets. While concerts start on Friday, the campsite opens up on Thursday afternoon. It is not un-

common for familiar guests to have a favourite campsite spot, with many groups of visitors setting up camp alongside friends made during earlier years. There are loyal visitors who have been coming to Lowlands for more than a decade. “The refusal to sell one-day tickets might be a disappointment to some, yet creates an enormous sense of unity,” Van Eerdenburg concludes. “Its three-day duration is one of the things that contribute to that typical Lowlands feeling: you arrive on Thursday evening and leave on Monday morning. Everything in between – the concerts, sizzling romances, musical discoveries, dancing in rain and sunshine – you fully experience with everybody else.” A Campingflight to Lowlands Paradise takes place from 18 to 20 August For more info, the full line-up and tickets, visit www.lowlands.nl