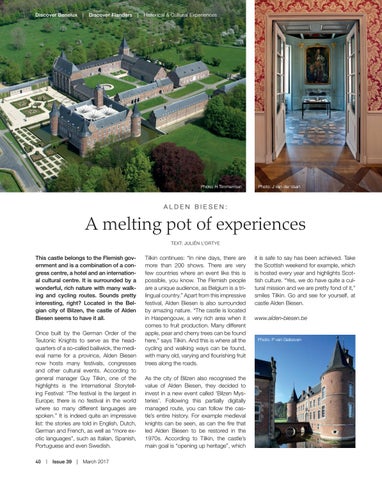 This castle belongs to the Flemish government and is a combination of a congress centre, a hotel and an international cultural centre. It is surrounded by a wonderful, rich nature with many walking and cycling routes. Sounds pretty interesting, right? Located in the Belgian city of Bilzen, the castle of Alden Biesen seems to have it all. Once built by the German Order of the Teutonic Knights to serve as the headquarters of a so-called bailiwick, the medieval name for a province, Alden Biesen now hosts many festivals, congresses and other cultural events. According to general manager Guy Tilkin, one of the highlights is the International Storytelling Festival: “The festival is the largest in Europe; there is no festival in the world where so many different languages are spoken.” It is indeed quite an impressive list: the stories are told in English, Dutch, German and French, as well as “more exotic languages”, such as Italian, Spanish, Portuguese and even Swedish. 40  |  Issue 39  |  March 2017

Tilkin continues: “In nine days, there are more than 200 shows. There are very few countries where an event like this is possible, you know. The Flemish people are a unique audience, as Belgium is a trilingual country.” Apart from this impressive festival, Alden Biesen is also surrounded by amazing nature. “The castle is located in Haspengouw, a very rich area when it comes to fruit production. Many different apple, pear and cherry trees can be found here,” says Tilkin. And this is where all the cycling and walking ways can be found, with many old, varying and flourishing fruit trees along the roads. As the city of Bilzen also recognised the value of Alden Biesen, they decided to invest in a new event called ‘Bilzen Mysteries’. Following this partially digitally managed route, you can follow the castle’s entire history. For example medieval knights can be seen, as can the fire that led Alden Biesen to be restored in the 1970s. According to Tilkin, the castle’s main goal is “opening up heritage”, which

it is safe to say has been achieved. Take the Scottish weekend for example, which is hosted every year and highlights Scottish culture. “Yes, we do have quite a cultural mission and we are pretty fond of it,” smiles Tilkin. Go and see for yourself, at castle Alden Biesen. www.alden-biesen.be