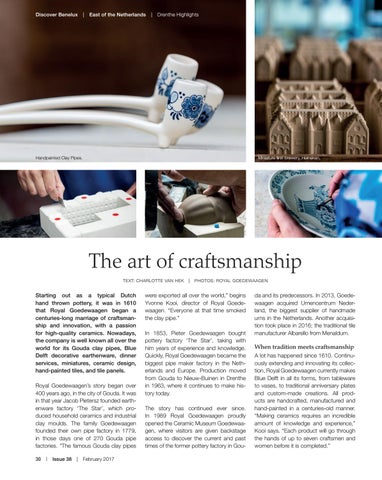 Starting out as a typical Dutch hand thrown pottery, it was in 1610 that Royal Goedewaagen began a centuries-long marriage of craftsmanship and innovation, with a passion for high-quality ceramics. Nowadays, the company is well known all over the world for its Gouda clay pipes, Blue Delft decorative earthenware, dinner services, miniatures, ceramic design, hand-painted tiles, and tile panels. Royal Goedewaagen’s story began over 400 years ago, in the city of Gouda. It was in that year Jacob Pietersz founded earthenware factory ‘The Star’, which produced household ceramics and industrial clay moulds. The family Goedewaagen founded their own pipe factory in 1779, in those days one of 270 Gouda pipe factories. “The famous Gouda clay pipes 30  |  Issue 38  |  February 2017

were exported all over the world,” begins Yvonne Kooi, director of Royal Goedewaagen. “Everyone at that time smoked the clay pipe.” In 1853, Pieter Goedewaagen bought pottery factory ‘The Star’, taking with him years of experience and knowledge. Quickly, Royal Goedewaagen became the biggest pipe maker factory in the Netherlands and Europe. Production moved from Gouda to Nieuw-Buinen in Drenthe in 1963, where it continues to make history today. The story has continued ever since. In 1989 Royal Goedewaagen proudly opened the Ceramic Museum Goedewaagen, where visitors are given backstage access to discover the current and past times of the former pottery factory in Gou-

da and its predecessors. In 2013, Goedewaagen acquired Urnencentrum Nederland, the biggest supplier of handmade urns in the Netherlands. Another acquisition took place in 2016; the traditional tile manufacturer Albarello from Menaldum.

When tradition meets craftsmanship A lot has happened since 1610. Continuously extending and innovating its collection, Royal Goedewaagen currently makes Blue Delft in all its forms, from tableware to vases, to traditional anniversary plates and custom-made creations. All products are handcrafted, manufactured and hand-painted in a centuries-old manner. “Making ceramics requires an incredible amount of knowledge and experience,” Kooi says. “Each product will go through the hands of up to seven craftsmen and women before it is completed.”