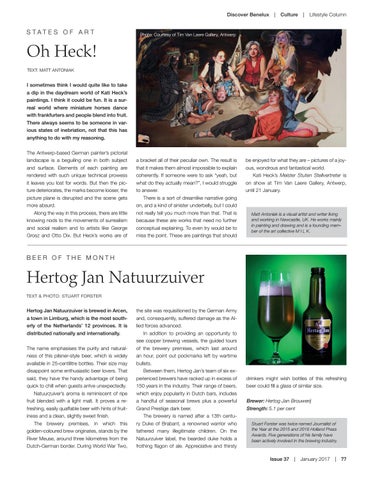 I sometimes think I would quite like to take a dip in the daydream world of Kati Heck’s paintings. I think it could be fun. It is a surreal world where miniature horses dance with frankfurters and people blend into fruit. There always seems to be someone in various states of inebriation, not that this has anything to do with my reasoning. The Antwerp-based German painter’s pictorial landscape is a beguiling one in both subject and surface. Elements of each painting are rendered with such unique technical prowess it leaves you lost for words. But then the picture deteriorates, the marks become looser, the picture plane is disrupted and the scene gets more absurd. Along the way in this process, there are little knowing nods to the movements of surrealism and social realism and to artists like George Grosz and Otto Dix. But Heck’s works are of

a bracket all of their peculiar own. The result is that it makes them almost impossible to explain coherently. If someone were to ask “yeah, but what do they actually mean?”, I would struggle to answer. There is a sort of dreamlike narrative going on, and a kind of sinister underbelly, but I could not really tell you much more than that. That is because these are works that need no further conceptual explaining. To even try would be to miss the point. These are paintings that should

be enjoyed for what they are – pictures of a joyous, wondrous and fantastical world. Kati Heck’s Meister Stuten Stellvertreter is on show at Tim Van Laere Gallery, Antwerp, until 21 January.

Hertog Jan Natuurzuiver is brewed in Arcen, a town in Limburg, which is the most southerly of the Netherlands’ 12 provinces. It is distributed nationally and internationally. The name emphasises the purity and naturalness of this pilsner-style beer, which is widely available in 25-centilitre bottles. Their size may disappoint some enthusiastic beer lovers. That said, they have the handy advantage of being quick to chill when guests arrive unexpectedly. Natuurzuiver’s aroma is reminiscent of ripe fruit blended with a light malt. It proves a refreshing, easily quaffable beer with hints of fruitiness and a clean, slightly sweet finish. The brewery premises, in which this golden-coloured brew originates, stands by the River Meuse, around three kilometres from the Dutch-German border. During World War Two,

the site was requisitioned by the German Army and, consequently, suffered damage as the Allied forces advanced. In addition to providing an opportunity to see copper brewing vessels, the guided tours of the brewery premises, which last around an hour, point out pockmarks left by wartime bullets. Between them, Hertog Jan’s team of six experienced brewers have racked up in excess of 150 years in the industry. Their range of beers, which enjoy popularity in Dutch bars, includes a handful of seasonal brews plus a powerful Grand Prestige dark beer. The brewery is named after a 13th century Duke of Brabant, a renowned warrior who fathered many illegitimate children. On the Natuurzuiver label, the bearded duke holds a frothing flagon of ale. Appreciative and thirsty

drinkers might wish bottles of this refreshing beer could fill a glass of similar size.

Brewer: Hertog Jan Brouwerij Strength: 5.1 per cent Stuart Forster was twice named Journalist of the Year at the 2015 and 2016 Holland Press Awards. Five generations of his family have been actively involved in the brewing industry.