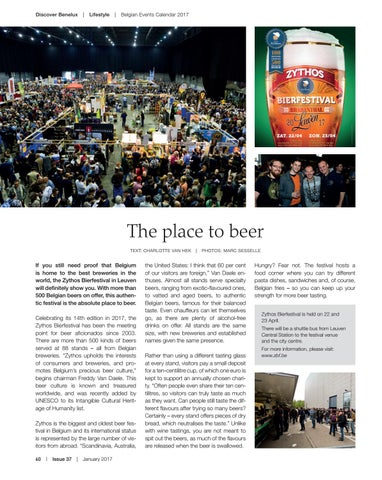 If you still need proof that Belgium is home to the best breweries in the world, the Zythos Bierfestival in Leuven will definitely show you. With more than 500 Belgian beers on offer, this authentic festival is the absolute place to beer. Celebrating its 14th edition in 2017, the Zythos Bierfestival has been the meeting point for beer aficionados since 2003. There are more than 500 kinds of beers served at 88 stands – all from Belgian breweries. “Zythos upholds the interests of consumers and breweries, and promotes Belgium’s precious beer culture,” begins chairman Freddy Van Daele. This beer culture is known and treasured worldwide, and was recently added by UNESCO to its Intangible Cultural Heritage of Humanity list. Zythos is the biggest and oldest beer festival in Belgium and its international status is represented by the large number of visitors from abroad. “Scandinavia, Australia, 60  |  Issue 37  |  January 2017

the United States: I think that 60 per cent of our visitors are foreign,” Van Daele enthuses. Almost all stands serve specialty beers, ranging from exotic-flavoured ones, to vatted and aged beers, to authentic Belgian beers, famous for their balanced taste. Even chauffeurs can let themselves go, as there are plenty of alcohol-free drinks on offer. All stands are the same size, with new breweries and established names given the same presence. Rather than using a different tasting glass at every stand, visitors pay a small deposit for a ten-centilitre cup, of which one euro is kept to support an annually chosen charity. “Often people even share their ten centilitres, so visitors can truly taste as much as they want. Can people still taste the different flavours after trying so many beers? Certainly – every stand offers pieces of dry bread, which neutralises the taste.” Unlike with wine tastings, you are not meant to spit out the beers, as much of the flavours are released when the beer is swallowed.

Hungry? Fear not. The festival hosts a food corner where you can try different pasta dishes, sandwiches and, of course, Belgian fries – so you can keep up your strength for more beer tasting. Zythos Bierfestival is held on 22 and 23 April. There will be a shuttle bus from Leuven Central Station to the festival venue and the city centre. For more information, please visit: www.zbf.be