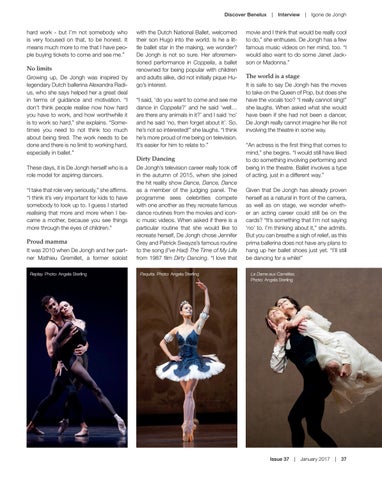 hard work - but I’m not somebody who is very focused on that, to be honest. It means much more to me that I have people buying tickets to come and see me.”

Growing up, De Jongh was inspired by legendary Dutch ballerina Alexandra Radius, who she says helped her a great deal in terms of guidance and motivation. “I don’t think people realise now how hard you have to work, and how worthwhile it is to work so hard,” she explains. “Sometimes you need to not think too much about being tired. The work needs to be done and there is no limit to working hard, especially in ballet.” These days, it is De Jongh herself who is a role model for aspiring dancers. “I take that role very seriously,” she affirms. “I think it’s very important for kids to have somebody to look up to. I guess I started realising that more and more when I became a mother, because you see things more through the eyes of children.”

It was 2010 when De Jongh and her partner Mathieu Gremillet, a former soloist Replay. Photo: Angela Sterling

with the Dutch National Ballet, welcomed their son Hugo into the world. Is he a little ballet star in the making, we wonder? De Jongh is not so sure. Her aforementioned performance in Coppelia, a ballet renowned for being popular with children and adults alike, did not initially pique Hugo’s interest. “I said, ‘do you want to come and see me dance in Coppelia?’ and he said ‘well… are there any animals in it?’ and I said ‘no’ and he said ‘no, then forget about it’. So, he’s not so interested!” she laughs. “I think he’s more proud of me being on television. It’s easier for him to relate to.”

De Jongh’s television career really took off in the autumn of 2015, when she joined the hit reality show Dance, Dance, Dance as a member of the judging panel. The programme sees celebrities compete with one another as they recreate famous dance routines from the movies and iconic music videos. When asked if there is a particular routine that she would like to recreate herself, De Jongh chose Jennifer Grey and Patrick Swayze’s famous routine to the song (I’ve Had) The Time of My Life from 1987 film Dirty Dancing. “I love that Paquita. Photo: Angela Sterling

movie and I think that would be really cool to do,” she enthuses. De Jongh has a few famous music videos on her mind, too. “I would also want to do some Janet Jackson or Madonna.”

The world is a stage

It is safe to say De Jongh has the moves to take on the Queen of Pop, but does she have the vocals too? “I really cannot sing!” she laughs. When asked what she would have been if she had not been a dancer, De Jongh really cannot imagine her life not involving the theatre in some way. “An actress is the first thing that comes to mind,” she begins. “I would still have liked to do something involving performing and being in the theatre. Ballet involves a type of acting, just in a different way.” Given that De Jongh has already proven herself as a natural in front of the camera, as well as on stage, we wonder whether an acting career could still be on the cards? “It’s something that I’m not saying ‘no’ to. I’m thinking about it,” she admits. But you can breathe a sigh of relief, as this prima ballerina does not have any plans to hang up her ballet shoes just yet. “I’ll still be dancing for a while!” La Dame aux Camélias. Photo: Angela Sterling