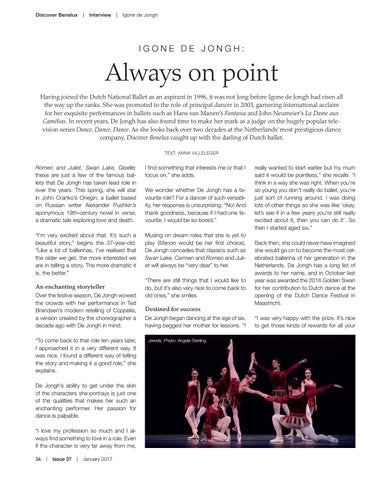 Always on point Having joined the Dutch National Ballet as an aspirant in 1996, it was not long before Igone de Jongh had risen all the way up the ranks. She was promoted to the role of principal dancer in 2003, garnering international acclaim for her exquisite performances in ballets such as Hans van Manen’s Fantasia and John Neumeier’s La Dame aux Camélias. In recent years, De Jongh has also found time to make her mark as a judge on the hugely popular television series Dance, Dance, Dance. As she looks back over two decades at the Netherlands’ most prestigious dance company, Discover Benelux caught up with the darling of Dutch ballet. TEXT: ANNA VILLELEGER

Romeo and Juliet, Swan Lake, Giselle; these are just a few of the famous ballets that De Jongh has taken lead role in over the years. This spring, she will star in John Cranko’s Onegin, a ballet based on Russian writer Alexander Pushkin’s eponymous 19th-century novel in verse, a dramatic tale exploring love and death. “I’m very excited about that. It’s such a beautiful story,” begins the 37-year-old. “Like a lot of ballerinas, I’ve realised that the older we get, the more interested we are in telling a story. The more dramatic it is, the better.”

Over the festive season, De Jongh wowed the crowds with her performance in Ted Brandsen’s modern retelling of Coppelia, a version created by the choreographer a decade ago with De Jongh in mind. “To come back to that role ten years later, I approached it in a very different way. It was nice, I found a different way of telling the story and making it a good role,” she explains. De Jongh’s ability to get under the skin of the characters she portrays is just one of the qualities that makes her such an enchanting performer. Her passion for dance is palpable. “I love my profession so much and I always find something to love in a role. Even if the character is very far away from me, 34  |  Issue 37  |  January 2017

I find something that interests me or that I focus on,” she adds. We wonder whether De Jongh has a favourite role? For a dancer of such versatility, her response is unsurprising. “No! And thank goodness, because if I had one favourite, I would be so bored.” Musing on dream roles that she is yet to play (Manon would be her first choice), De Jongh concedes that classics such as Swan Lake, Carmen and Romeo and Juliet will always be “very dear” to her. “There are still things that I would like to do, but it’s also very nice to come back to old ones,” she smiles.

De Jongh began dancing at the age of six, having begged her mother for lessons. “I Jewels. Photo: Angela Sterling

really wanted to start earlier but my mum said it would be pointless,” she recalls. “I think in a way she was right. When you’re so young you don’t really do ballet, you’re just sort of running around. I was doing lots of other things so she was like ‘okay, let’s see if in a few years you’re still really excited about it, then you can do it’. So then I started aged six.” Back then, she could never have imagined she would go on to become the most celebrated ballerina of her generation in the Netherlands. De Jongh has a long list of awards to her name, and in October last year was awarded the 2016 Golden Swan for her contribution to Dutch dance at the opening of the Dutch Dance Festival in Maastricht. “I was very happy with the prize. It’s nice to get those kinds of rewards for all your