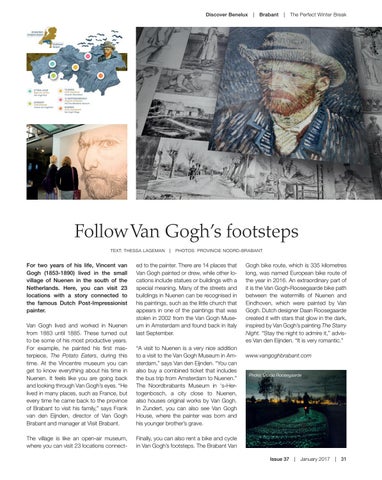 For two years of his life, Vincent van Gogh (1853-1890) lived in the small village of Nuenen in the south of the Netherlands. Here, you can visit 23 locations with a story connected to the famous Dutch Post-Impressionist painter. Van Gogh lived and worked in Nuenen from 1883 until 1885. These turned out to be some of his most productive years. For example, he painted his first masterpiece, The Potato Eaters, during this time. At the Vincentre museum you can get to know everything about his time in Nuenen. It feels like you are going back and looking through Van Gogh’s eyes. “He lived in many places, such as France, but every time he came back to the province of Brabant to visit his family,” says Frank van den Eijnden, director of Van Gogh Brabant and manager at Visit Brabant. The village is like an open-air museum, where you can visit 23 locations connect-

ed to the painter. There are 14 places that Van Gogh painted or drew, while other locations include statues or buildings with a special meaning. Many of the streets and buildings in Nuenen can be recognised in his paintings, such as the little church that appears in one of the paintings that was stolen in 2002 from the Van Gogh Museum in Amsterdam and found back in Italy last September. “A visit to Nuenen is a very nice addition to a visit to the Van Gogh Museum in Amsterdam,” says Van den Eijnden. “You can also buy a combined ticket that includes the bus trip from Amsterdam to Nuenen.” The Noordbrabants Museum in ‘s-Hertogenbosch, a city close to Nuenen, also houses original works by Van Gogh. In Zundert, you can also see Van Gogh House, where the painter was born and his younger brother’s grave.

Gogh bike route, which is 335 kilometres long, was named European bike route of the year in 2016. An extraordinary part of it is the Van Gogh-Roosegaarde bike path between the watermills of Nuenen and Eindhoven, which were painted by Van Gogh. Dutch designer Daan Roosegaarde created it with stars that glow in the dark, inspired by Van Gogh’s painting The Starry Night. “Stay the night to admire it,” advises Van den Eijnden. “It is very romantic.” www.vangoghbrabant.com Photo: Studio Roosegaarde