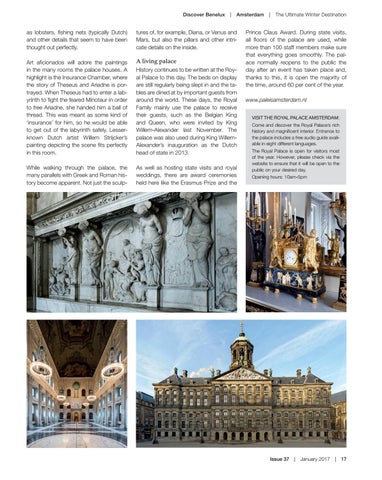 as lobsters, fishing nets (typically Dutch) and other details that seem to have been thought out perfectly.

tures of, for example, Diana, or Venus and Mars, but also the pillars and other intricate details on the inside.

Art aficionados will adore the paintings in the many rooms the palace houses. A highlight is the Insurance Chamber, where the story of Theseus and Ariadne is portrayed. When Theseus had to enter a labyrinth to fight the feared Minotaur in order to free Ariadne, she handed him a ball of thread. This was meant as some kind of ‘insurance’ for him, so he would be able to get out of the labyrinth safely. Lesserknown Dutch artist Willem Strijcker’s painting depicting the scene fits perfectly in this room.

While walking through the palace, the many parallels with Greek and Roman history become apparent. Not just the sculp-

As well as hosting state visits and royal weddings, there are award ceremonies held here like the Erasmus Prize and the

History continues to be written at the Royal Palace to this day. The beds on display are still regularly being slept in and the tables are dined at by important guests from around the world. These days, the Royal Family mainly use the palace to receive their guests, such as the Belgian King and Queen, who were invited by King Willem-Alexander last November. The palace was also used during King WillemAlexander’s inauguration as the Dutch head of state in 2013.

Prince Claus Award. During state visits, all floors of the palace are used, while more than 100 staff members make sure that everything goes smoothly. The palace normally reopens to the public the day after an event has taken place and, thanks to this, it is open the majority of the time, around 60 per cent of the year. www.paleisamsterdam.nl VISIT THE ROYAL PALACE AMSTERDAM: Come and discover the Royal Palace’s rich history and magnificent interior. Entrance to the palace includes a free audio guide available in eight different languages. The Royal Palace is open for visitors most of the year. However, please check via the website to ensure that it will be open to the public on your desired day. Opening hours: 10am-5pm