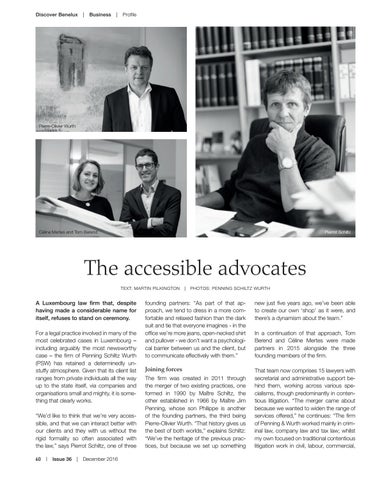 A Luxembourg law firm that, despite having made a considerable name for itself, refuses to stand on ceremony. For a legal practice involved in many of the most celebrated cases in Luxembourg – including arguably the most newsworthy case – the firm of Penning Schiltz Wurth (PSW) has retained a determinedly unstuffy atmosphere. Given that its client list ranges from private individuals all the way up to the state itself, via companies and organisations small and mighty, it is something that clearly works. “We’d like to think that we’re very accessible, and that we can interact better with our clients and they with us without the rigid formality so often associated with the law,” says Pierrot Schiltz, one of three 60  |  Issue 36  |  December 2016

founding partners: “As part of that approach, we tend to dress in a more comfortable and relaxed fashion than the dark suit and tie that everyone imagines - in the office we’re more jeans, open-necked shirt and pullover - we don’t want a psychological barrier between us and the client, but to communicate effectively with them.”

new just five years ago, we’ve been able to create our own ‘shop’ as it were, and there’s a dynamism about the team.”

That team now comprises 15 lawyers with secretarial and administrative support behind them, working across various specialisms, though predominantly in contentious litigation. “The merger came about because we wanted to widen the range of services offered,” he continues: “The firm of Penning &amp; Wurth worked mainly in criminal law, company law and tax law; whilst my own focused on traditional contentious litigation work in civil, labour, commercial,

The firm was created in 2011 through the merger of two existing practices, one formed in 1990 by Maître Schiltz, the other established in 1966 by Maître Jim Penning, whose son Philippe is another of the founding partners, the third being Pierre-Olivier Wurth. “That history gives us the best of both worlds,” explains Schiltz: “We’ve the heritage of the previous practices, but because we set up something

In a continuation of that approach, Tom Berend and Céline Mertes were made partners in 2015 alongside the three founding members of the firm.