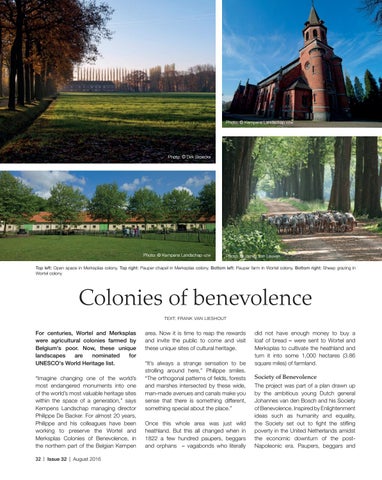 Discover Benelux | Top Things to Do & Places to Visit | Flanders

For centuries, Wortel and Merksplas were agricultural colonies farmed by Belgium's poor. Now, these unique landscapes are nominated for UNESCO's World Heritage list. “Imagine changing one of the world’s most endangered monuments into one of the world’s most valuable heritage sites within the space of a generation,” says Kempens Landschap managing director Philippe De Backer. For almost 20 years, Philippe and his colleagues have been working to preserve the Wortel and Merksplas Colonies of Benevolence, in the northern part of the Belgian Kempen 32 | Issue 32 | August 2016

area. Now it is time to reap the rewards and invite the public to come and visit these unique sites of cultural heritage. “It’s always a strange sensation to be strolling around here,” Philippe smiles. “The orthogonal patterns of fields, forests and marshes intersected by these wide, man-made avenues and canals make you sense that there is something different, something special about the place.” Once this whole area was just wild heathland. But this all changed when in 1822 a few hundred paupers, beggars and orphans – vagabonds who literally

did not have enough money to buy a loaf of bread – were sent to Wortel and Merksplas to cultivate the heathland and turn it into some 1,000 hectares (3.86 square miles) of farmland.

Society of Benevolence The project was part of a plan drawn up by the ambitious young Dutch general Johannes van den Bosch and his Society of Benevolence. Inspired by Enlightenment ideas such as humanity and equality, the Society set out to fight the stifling poverty in the United Netherlands amidst the economic downturn of the postNapoleonic era. Paupers, beggars and