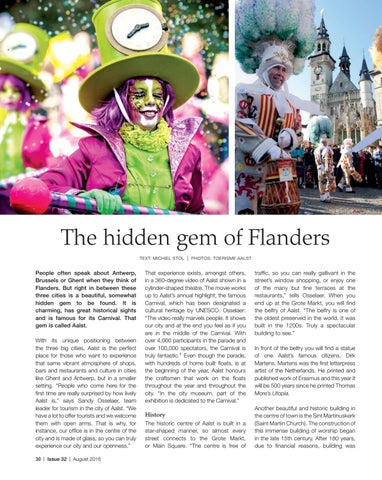 People often speak about Antwerp, Brussels or Ghent when they think of Flanders. But right in between these three cities is a beautiful, somewhat hidden gem to be found. It is charming, has great historical sights and is famous for its Carnival. That gem is called Aalst. With its unique positioning between the three big cities, Aalst is the perfect place for those who want to experience that same vibrant atmosphere of shops, bars and restaurants and culture in cities like Ghent and Antwerp, but in a smaller setting. “People who come here for the first time are really surprised by how lively Aalst is,” says Sandy Osselaer, team leader for tourism in the city of Aalst. “We have a lot to offer tourists and we welcome them with open arms. That is why, for instance, our office is in the centre of the city and is made of glass, so you can truly experience our city and our openness.” 30 | Issue 32 | August 2016

That experience exists, amongst others, in a 360-degree video of Aalst shown in a cylinder-shaped theatre. The movie works up to Aalst’s annual highlight; the famous Carnival, which has been designated a cultural heritage by UNESCO. Osselaer: “The video really marvels people. It shows our city and at the end you feel as if you are in the middle of the Carnival. With over 4,000 participants in the parade and over 100,000 spectators, the Carnival is truly fantastic.” Even though the parade, with hundreds of home built floats, is at the beginning of the year, Aalst honours the craftsmen that work on the floats throughout the year and throughout the city. “In the city museum, part of the exhibition is dedicated to the Carnival.”

History The historic centre of Aalst is built in a star-shaped manner, so almost every street connects to the Grote Markt, or Main Square. “The centre is free of

traffic, so you can really gallivant in the street’s window shopping, or enjoy one of the many but fine terraces at the restaurants,” tells Osselaer. When you end up at the Grote Markt, you will find the belfry of Aalst. “The belfry is one of the oldest preserved in the world. It was built in the 1200s. Truly a spectacular building to see.” In front of the belfry you will find a statue of one Aalst’s famous citizens, Dirk Martens. Martens was the first letterpress artist of the Netherlands. He printed and published work of Erasmus and this year it will be 500 years since he printed Thomas More’s Utopia. Another beautiful and historic building in the centre of town is the Sint Martinuskerk (Saint Martin Church). The construction of this immense building of worship began in the late 15th century. After 180 years, due to financial reasons, building was