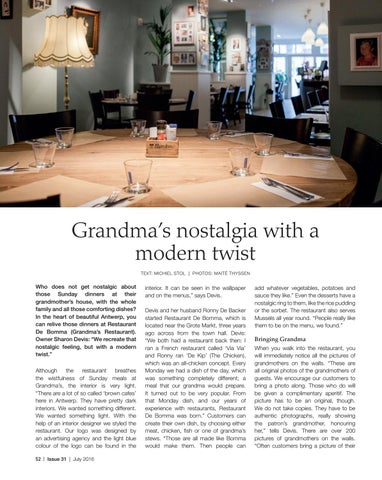 Who does not get nostalgic about those Sunday dinners at their grandmother’s house, with the whole family and all those comforting dishes? In the heart of beautiful Antwerp, you can relive those dinners at Restaurant De Bomma (Grandma’s Restaurant). Owner Sharon Devis: “We recreate that nostalgic feeling, but with a modern twist.” Although the restaurant breathes the wistfulness of Sunday meals at Grandma’s, the interior is very light. “There are a lot of so called ‘brown cafes’ here in Antwerp. They have pretty dark interiors. We wanted something different. We wanted something light. With the help of an interior designer we styled the restaurant. Our logo was designed by an advertising agency and the light blue colour of the logo can be found in the 52 | Issue 31 | July 2016

interior. It can be seen in the wallpaper and on the menus,” says Devis. Devis and her husband Ronny De Backer started Restaurant De Bomma, which is located near the Grote Markt, three years ago across from the town hall. Devis: “We both had a restaurant back then: I ran a French restaurant called ‘Via Via’ and Ronny ran ‘De Kip’ (The Chicken), which was an all-chicken concept. Every Monday we had a dish of the day, which was something completely different; a meal that our grandma would prepare. It turned out to be very popular. From that Monday dish, and our years of experience with restaurants, Restaurant De Bomma was born.” Customers can create their own dish, by choosing either meat, chicken, fish or one of grandma’s stews. “Those are all made like Bomma would make them. Then people can

add whatever vegetables, potatoes and sauce they like.” Even the desserts have a nostalgic ring to them, like the rice pudding or the sorbet. The restaurant also serves Mussels all year round. “People really like them to be on the menu, we found.”

Bringing Grandma When you walk into the restaurant, you will immediately notice all the pictures of grandmothers on the walls. “These are all original photos of the grandmothers of guests. We encourage our customers to bring a photo along. Those who do will be given a complimentary aperitif. The picture has to be an original, though. We do not take copies. They have to be authentic photographs, really showing the patron’s grandmother, honouring her,” tells Devis. There are over 200 pictures of grandmothers on the walls. “Often customers bring a picture of their