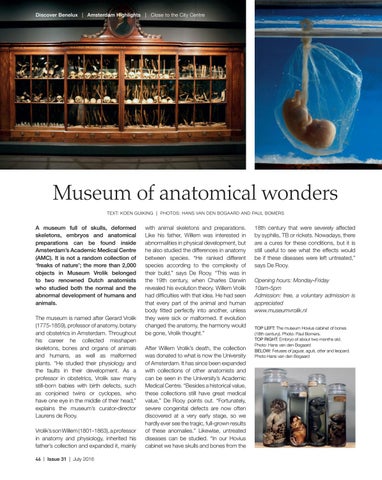 A museum full of skulls, deformed skeletons, embryos and anatomical preparations can be found inside Amsterdam’s Academic Medical Centre (AMC). It is not a random collection of ‘freaks of nature’; the more than 2,000 objects in Museum Vrolik belonged to two renowned Dutch anatomists who studied both the normal and the abnormal development of humans and animals. The museum is named after Gerard Vrolik (1775-1859), professor of anatomy, botany and obstetrics in Amsterdam. Throughout his career he collected misshapen skeletons, bones and organs of animals and humans, as well as malformed plants. “He studied their physiology and the faults in their development. As a professor in obstetrics, Vrolik saw many still-born babies with birth defects, such as conjoined twins or cyclopes, who have one eye in the middle of their head,” explains the museum’s curator-director Laurens de Rooy. Vrolik’s son Willem (1801-1863), a professor in anatomy and physiology, inherited his father’s collection and expanded it, mainly 46 | Issue 31 | July 2016

with animal skeletons and preparations. Like his father, Willem was interested in abnormalities in physical development, but he also studied the differences in anatomy between species. “He ranked different species according to the complexity of their build,” says De Rooy. “This was in the 19th century, when Charles Darwin revealed his evolution theory. Willem Vrolik had difficulties with that idea. He had seen that every part of the animal and human body fitted perfectly into another, unless they were sick or malformed. If evolution changed the anatomy, the harmony would be gone, Vrolik thought.” After Willem Vrolik’s death, the collection was donated to what is now the University of Amsterdam. It has since been expanded with collections of other anatomists and can be seen in the University’s Academic Medical Centre. “Besides a historical value, these collections still have great medical value,” De Rooy points out. “Fortunately, severe congenital defects are now often discovered at a very early stage, so we hardly ever see the tragic, full-grown results of these anomalies.” Likewise, untreated diseases can be studied. “In our Hovius cabinet we have skulls and bones from the

18th century that were severely affected by syphilis, TB or rickets. Nowadays, there are a cures for these conditions, but it is still useful to see what the effects would be if these diseases were left untreated,” says De Rooy. Opening hours: Monday-Friday 10am-5pm Admission: free, a voluntary admission is appreciated www.museumvrolik.nl TOP LEFT: The museum Hovius cabinet of bones (18th century). Photo: Paul Bomers. TOP RIGHT: Embryo of about two months old. Photo: Hans van den Bogaard BELOW: Fetuses of jaguar, aguti, otter and leopard. Photo Hans van den Bogaard