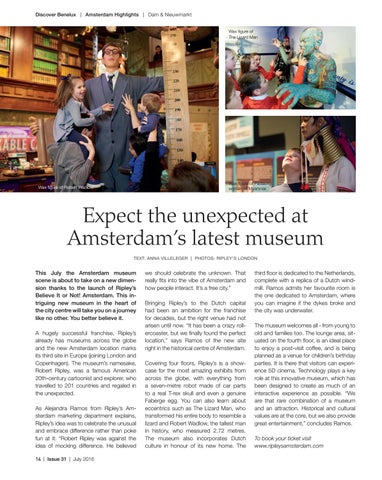 This July the Amsterdam museum scene is about to take on a new dimension thanks to the launch of Ripley’s Believe It or Not! Amsterdam. This intriguing new museum in the heart of the city centre will take you on a journey like no other. You better believe it. A hugely successful franchise, Ripley’s already has museums across the globe and the new Amsterdam location marks its third site in Europe (joining London and Copenhagen). The museum’s namesake, Robert Ripley, was a famous American 20th-century cartoonist and explorer, who travelled to 201 countries and regaled in the unexpected. As Alejandra Ramos from Ripley’s Amsterdam marketing department explains, Ripley’s idea was to celebrate the unusual and embrace difference rather than poke fun at it: “Robert Ripley was against the idea of mocking difference. He believed 14 | Issue 31 | July 2016

we should celebrate the unknown. That really fits into the vibe of Amsterdam and how people interact. It’s a free city.” Bringing Ripley’s to the Dutch capital had been an ambition for the franchise for decades, but the right venue had not arisen until now. “It has been a crazy rollercoaster, but we finally found the perfect location,” says Ramos of the new site right in the historical centre of Amsterdam. Covering four floors, Ripley’s is a showcase for the most amazing exhibits from across the globe, with everything from a seven-metre robot made of car parts to a real T-rex skull and even a genuine Faberge egg. You can also learn about eccentrics such as The Lizard Man, who transformed his entire body to resemble a lizard and Robert Wadlow, the tallest man in history, who measured 2.72 metres. The museum also incorporates Dutch culture in honour of its new home. The

third floor is dedicated to the Netherlands, complete with a replica of a Dutch windmill. Ramos admits her favourite room is the one dedicated to Amsterdam, where you can imagine if the dykes broke and the city was underwater. The museum welcomes all - from young to old and families too. The lounge area, situated on the fourth floor, is an ideal place to enjoy a post-visit coffee, and is being planned as a venue for children’s birthday parties. It is there that visitors can experience 5D cinema. Technology plays a key role at this innovative museum, which has been designed to create as much of an interactive experience as possible. “We are that rare combination of a museum and an attraction. Historical and cultural values are at the core, but we also provide great entertainment,” concludes Ramos. To book your ticket visit www.ripleysamsterdam.com