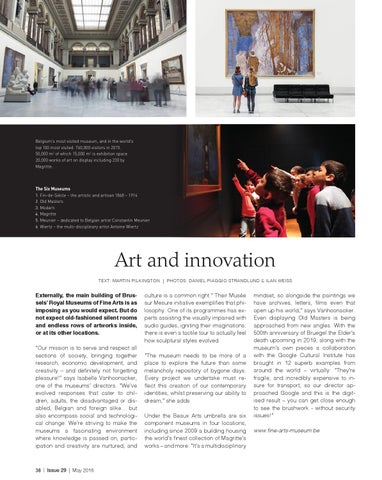 Externally, the main building of Brussels’ Royal Museums of Fine Arts is as imposing as you would expect. But do not expect old-fashioned silent rooms and endless rows of artworks inside, or at its other locations. “Our mission is to serve and respect all sections of society, bringing together research, economic development, and creativity – and definitely not forgetting pleasure!” says Isabelle Vanhoonacker, one of the museums’ directors. “We’ve evolved responses that cater to children, adults, the disadvantaged or disabled, Belgian and foreign alike... but also encompass social and technological change. We’re striving to make the museums a fascinating environment where knowledge is passed on, participation and creativity are nurtured, and

culture is a common right.” Their Musée sur Mesure initiative exemplifies that philosophy. One of its programmes has experts assisting the visually impaired with audio guides, igniting their imaginations; there is even a tactile tour to actually feel how sculptural styles evolved. “The museum needs to be more of a place to explore the future than some melancholy repository of bygone days. Every project we undertake must reflect this creation of our contemporary identities, whilst preserving our ability to dream,” she adds. Under the Beaux Arts umbrella are six component museums in four locations, including since 2009 a building housing the world’s finest collection of Magritte’s works – and more: “It’s a multidisciplinary

mindset, so alongside the paintings we have archives, letters, films even that open up his world,” says Vanhoonacker. Even displaying Old Masters is being approached from new angles. With the 500th anniversary of Bruegel the Elder’s death upcoming in 2019, along with the museum’s own pieces a collaboration with the Google Cultural Institute has brought in 12 superb examples from around the world – virtually: “They’re fragile, and incredibly expensive to insure for transport, so our director approached Google and this is the digitised result – you can get close enough to see the brushwork - without security issues!” www.fine-arts-museum.be