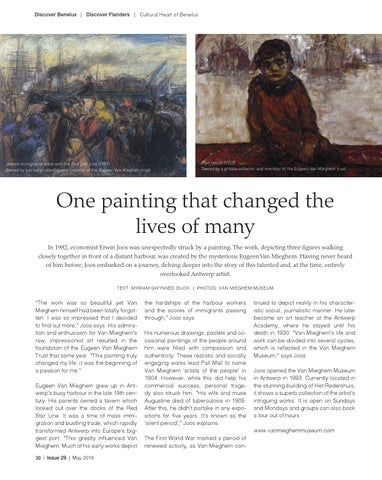 One painting that changed the lives of many In 1982, economist Erwin Joos was unexpectedly struck by a painting. The work, depicting three figures walking closely together in front of a distant harbour, was created by the mysterious Eugeen Van Mieghem. Having never heard of him before, Joos embarked on a journey, delving deeper into the story of this talented and, at the time, entirely overlooked Antwerp artist. TEXT: MYRIAM GWYNNED DIJCK | PHOTOS: VAN MIEGHEM MUSEUM

“The work was so beautiful yet Van Mieghem himself had been totally forgotten. I was so impressed that I decided to find out more,” Joos says. His admiration and enthusiasm for Van Mieghem’s raw, impressionist art resulted in the foundation of the Eugeen Van Mieghem Trust that same year. “This painting truly changed my life; it was the beginning of a passion for me.” Eugeen Van Mieghem grew up in Antwerp’s busy harbour in the late 19th century. His parents owned a tavern which looked out over the docks of the Red Star Line. It was a time of mass immigration and bustling trade, which rapidly transformed Antwerp into Europe’s biggest port. “This greatly influenced Van Mieghem. Much of his early works depict 30 | Issue 29 | May 2016

the hardships of the harbour workers and the scores of immigrants passing through,” Joos says. His numerous drawings, pastels and occasional paintings of the people around him were filled with compassion and authenticity. These realistic and socially engaging works lead Pall Mall to name Van Mieghem ‘artists of the people’ in 1904. However, while this did help his commercial success, personal tragedy also struck him. “His wife and muse Augustine died of tuberculosis in 1905. After this, he didn’t partake in any expositions for five years. It’s known as the ‘silent period’,” Joos explains. The First World War marked a period of renewed activity, as Van Mieghem con-

tinued to depict reality in his characteristic social, journalistic manner. He later became an art teacher at the Antwerp Academy, where he stayed until his death in 1930. “Van Mieghem’s life and work can be divided into several cycles, which is reflected in the Van Mieghem Museum,” says Joos. Joos opened the Van Mieghem Museum in Antwerp in 1993. Currently located in the stunning building of Het Redershuis, it shows a superb collection of the artist’s intriguing works. It is open on Sundays and Mondays and groups can also book a tour out of hours. www.vanmieghemmuseum.com