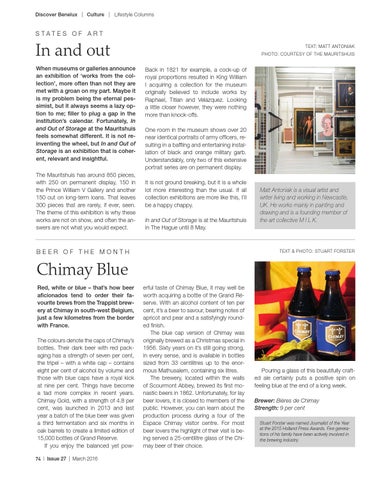 In and out When museums or galleries announce an exhibition of ‘works from the collection’, more often than not they are met with a groan on my part. Maybe it is my problem being the eternal pessimist, but it always seems a lazy option to me; filler to plug a gap in the institution’s calendar. Fortunately, In and Out of Storage at the Mauritshuis feels somewhat different. It is not reinventing the wheel, but In and Out of Storage is an exhibition that is coherent, relevant and insightful. The Mauritshuis has around 850 pieces, with 250 on permanent display, 150 in the Prince William V Gallery and another 150 out on long-term loans. That leaves 300 pieces that are rarely, if ever, seen. The theme of this exhibition is why these works are not on show, and often the answers are not what you would expect.

Back in 1821 for example, a cock-up of royal proportions resulted in King William I acquiring a collection for the museum originally believed to include works by Raphael, Titian and Velázquez. Looking a little closer however, they were nothing more than knock-offs. One room in the museum shows over 20 near identical portraits of army officers, resulting in a baffling and entertaining installation of black and orange military garb. Understandably, only two of this extensive portrait series are on permanent display. It is not ground breaking, but it is a whole lot more interesting than the usual. If all collection exhibitions are more like this, I’ll be a happy chappy. In and Out of Storage is at the Mauritshuis in The Hague until 8 May.

Chimay Blue Red, white or blue – that’s how beer aficionados tend to order their favourite brews from the Trappist brewery at Chimay in south-west Belgium, just a few kilometres from the border with France. The colours denote the caps of Chimay’s bottles. Their dark beer with red packaging has a strength of seven per cent, the tripel – with a white cap – contains eight per cent of alcohol by volume and those with blue caps have a royal kick at nine per cent. Things have become a tad more complex in recent years. Chimay Gold, with a strength of 4.8 per cent, was launched in 2013 and last year a batch of the blue beer was given a third fermentation and six months in oak barrels to create a limited edition of 15,000 bottles of Grand Réserve. If you enjoy the balanced yet pow74 | Issue 27 | March 2016

erful taste of Chimay Blue, it may well be worth acquiring a bottle of the Grand Réserve. With an alcohol content of ten per cent, it’s a beer to savour, bearing notes of apricot and pear and a satisfyingly rounded finish. The blue cap version of Chimay was originally brewed as a Christmas special in 1956. Sixty years on it’s still going strong, in every sense, and is available in bottles sized from 33 centilitres up to the enormous Mathusalem, containing six litres. The brewery, located within the walls of Scourmont Abbey, brewed its first monastic beers in 1862. Unfortunately, for lay beer lovers, it is closed to members of the public. However, you can learn about the production process during a tour of the Espace Chimay visitor centre. For most beer lovers the highlight of their visit is being served a 25-centilitre glass of the Chimay beer of their choice.

Pouring a glass of this beautifully crafted ale certainly puts a positive spin on feeling blue at the end of a long week. Brewer: Bières de Chimay Strength: 9 per cent Stuart Forster was named Journalist of the Year at the 2015 Holland Press Awards. Five generations of his family have been actively involved in the brewing industry.