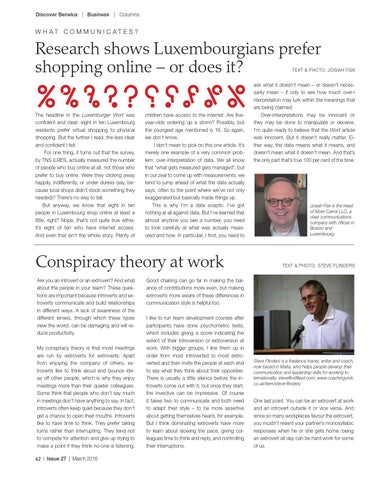 Research shows Luxembourgians prefer shopping online – or does it?

The headline in the Luxemburger Wort was confident and clear: eight in ten Luxembourg residents prefer virtual shopping to physical shopping. But the further I read, the less clear and confident I felt. For one thing, it turns out that the survey, by TNS ILRES, actually measured the number of people who buy online at all, not those who prefer to buy online. Were they clicking away happily, indifferently, or under duress (say, because local shops didn’t stock something they needed)? There’s no way to tell. But anyway, we know that eight in ten people in Luxembourg shop online at least a little, right? Nope, that’s not quite true either. It’s eight of ten who have internet access. And even that isn’t the whole story. Plenty of

children have access to the internet. Are fiveyear-olds ordering up a storm? Possibly, but the youngest age mentioned is 16. So again, we don’t know. I don’t mean to pick on this one article. It’s merely one example of a very common problem: over-interpretation of data. We all know that “what gets measured gets managed”, but in our zeal to come up with measurements, we tend to jump ahead of what the data actually says, often to the point where we’ve not only exaggerated but basically made things up. This is why I’m a data sceptic. I’ve got nothing at all against data. But I’ve learned that almost anytime you see a number, you need to look carefully at what was actually measured and how. In particular, I find, you need to

Conspiracy theory at work Are you an introvert or an extrovert? And what about the people in your team? These questions are important because introverts and extroverts communicate and build relationships in different ways. A lack of awareness of the different lenses, through which these types view the world, can be damaging and will reduce productivity. My conspiracy theory is that most meetings are run by extroverts for extroverts. Apart from enjoying the company of others, extroverts like to think aloud and bounce ideas off other people, which is why they enjoy meetings more than their quieter colleagues. Some think that people who don’t say much in meetings don’t have anything to say. In fact, introverts often keep quiet because they don’t get a chance to open their mouths. Introverts like to have time to think. They prefer taking turns rather than interrupting. They tend not to compete for attention and give up trying to make a point if they think no-one is listening. 62 | Issue 27 | March 2016

ask what it doesn’t mean – or doesn’t necessarily mean – if only to see how much over-i nterpretation may lurk within the meanings that are being claimed. Over-interpretations may be innocent or they may be done to manipulate or deceive. I’m quite ready to believe that the Wort article was innocent. But it doesn’t really matter. Either way, the data means what it means, and doesn’t mean what it doesn’t mean. And that’s the only part that’s true 100 per cent of the time.

Good chairing can go far in making the balance of contributions more even, but making extroverts more aware of these differences in communication style is helpful too. I like to run team development courses after participants have done psychometric tests, which includes giving a score indicating the extent of their introversion or extroversion at work. With bigger groups, I line them up in order from most introverted to most extroverted and then invite the people at each end to say what they think about their opposites. There is usually a little silence before the introverts come out with it, but once they start, the invective can be impressive. Of course it takes two to communicate and both need to adapt their style – to be more assertive about getting themselves heard, for example. But I think dominating extroverts have more to learn about slowing the pace, giving colleagues time to think and reply, and controlling their interruptions.

Steve Flinders is a freelance trainer, writer and coach, now based in Malta, who helps people develop their communication and leadership skills for working internationally: steveflind@aol.com; www.coachingyork. co.uk/item/steve-flinders/

One last point. You can be an extrovert at work and an introvert outside it or vice versa. And since so many workplaces favour the extrovert, you mustn’t resent your partner’s monosyllabic responses when he or she gets home: being an extrovert all day can be hard work for some of us.