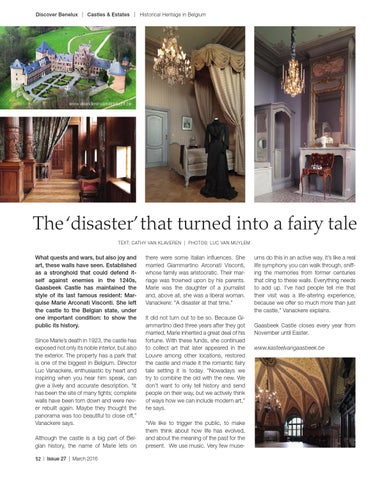 What quests and wars, but also joy and art, these walls have seen. Established as a stronghold that could defend itself against enemies in the 1240s, Gaasbeek Castle has maintained the style of its last famous resident: Marquise Marie Arconati Visconti. She left the castle to the Belgian state, under one important condition: to show the public its history. Since Marie’s death in 1923, the castle has exposed not only its noble interior, but also the exterior. The property has a park that is one of the biggest in Belgium. Director Luc Vanackere, enthusiastic by heart and inspiring when you hear him speak, can give a lively and accurate description. “It has been the site of many fights; complete walls have been torn down and were never rebuilt again. Maybe they thought the panorama was too beautiful to close off,” Vanackere says. Although the castle is a big part of Belgian history, the name of Marie lets on 52 | Issue 27 | March 2016

there were some Italian influences. She married Giammartino Arconati Visconti, whose family was aristocratic. Their marriage was frowned upon by his parents. Marie was the daughter of a journalist and, above all, she was a liberal woman. Vanackere: “A disaster at that time.” It did not turn out to be so. Because Giammartino died three years after they got married, Marie inherited a great deal of his fortune. With these funds, she continued to collect art that later appeared in the Louvre among other locations, restored the castle and made it the romantic fairy tale setting it is today. “Nowadays we try to combine the old with the new. We don’t want to only tell history and send people on their way, but we actively think of ways how we can include modern art,” he says. “We like to trigger the public, to make them think about how life has evolved, and about the meaning of the past for the present. We use music. Very few muse-

ums do this in an active way. It’s like a real life symphony you can walk through, sniffing the memories from former centuries that cling to these walls. Everything needs to add up. I’ve had people tell me that their visit was a life-altering experience, because we offer so much more than just the castle,” Vanackere explains. Gaasbeek Castle closes every year from November until Easter. www.kasteelvangaasbeek.be