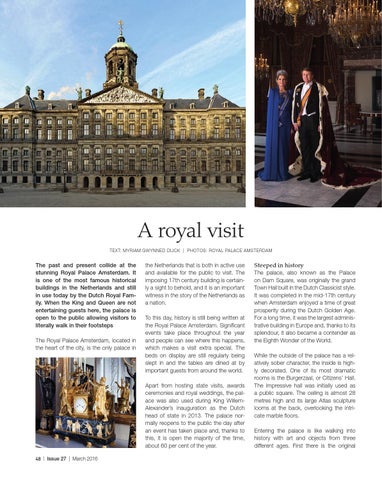 The past and present collide at the stunning Royal Palace Amsterdam. It is one of the most famous historical buildings in the Netherlands and still in use today by the Dutch Royal Family. When the King and Queen are not entertaining guests here, the palace is open to the public allowing visitors to literally walk in their footsteps The Royal Palace Amsterdam, located in the heart of the city, is the only palace in

the Netherlands that is both in active use and available for the public to visit. The imposing 17th century building is certainly a sight to behold, and it is an important witness in the story of the Netherlands as a nation. To this day, history is still being written at the Royal Palace Amsterdam. Significant events take place throughout the year and people can see where this happens, which makes a visit extra special. The beds on display are still regularly being slept in and the tables are dined at by important guests from around the world. Apart from hosting state visits, awards ceremonies and royal weddings, the palace was also used during King WillemAlexanderâ&amp;#x20AC;&amp;#x2122;s inauguration as the Dutch head of state in 2013. The palace normally reopens to the public the day after an event has taken place and, thanks to this, it is open the majority of the time, about 60 per cent of the year.

Steeped in history The palace, also known as the Palace on Dam Square, was originally the grand Town Hall built in the Dutch Classicist style. It was completed in the mid-17th century when Amsterdam enjoyed a time of great prosperity during the Dutch Golden Age. For a long time, it was the largest administrative building in Europe and, thanks to its splendour, it also became a contender as the Eighth Wonder of the World. While the outside of the palace has a relatively sober character, the inside is highly decorated. One of its most dramatic rooms is the Burgerzaal, or Citizensâ&amp;#x20AC;&amp;#x2122; Hall. The impressive hall was initially used as a public square. The ceiling is almost 28 metres high and its large Atlas sculpture looms at the back, overlooking the intricate marble floors. Entering the palace is like walking into history with art and objects from three different ages. First there is the original